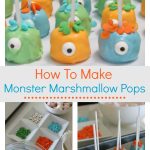 Inside: Learn how to make easy monster marshmallow pops.  Kids and adults alike will love these, and you don’t need to have baking skills to pull them off.

They are a lot of fun for birthday parties, or to be used as Halloween treats.  You will want to keep this monster pops recipe close to hand. 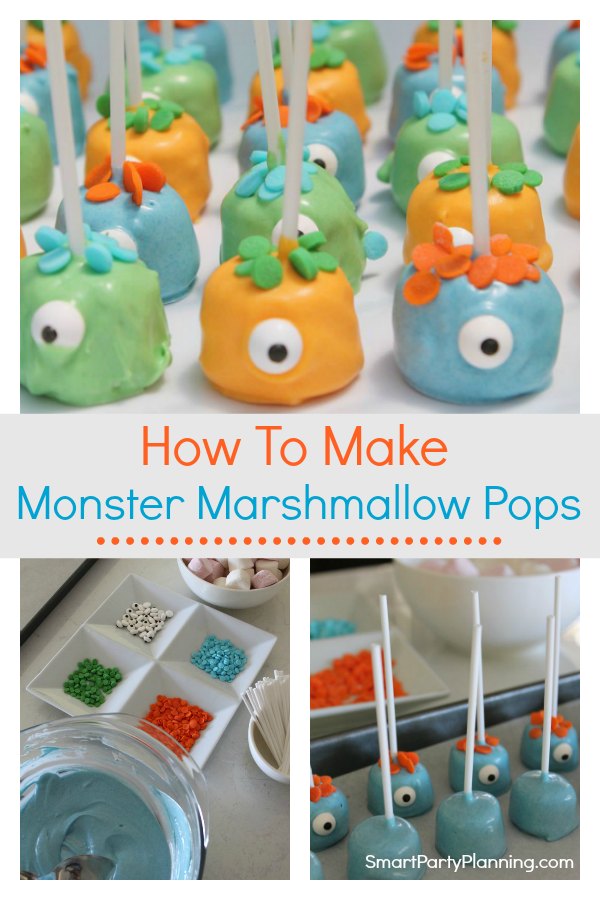 Once you know how to make marshmallow pops, they become a staple food at your kids party.

How do I know this?  I used to want to make cake pops.  Then I discovered marshmallow pops.  After I realized how easy they to make, I have literally made them at every single kids party I’ve held.

Yes, I am pretty addicted to these when it comes to kids party food preparation!

I can’t decide whether these or the monkey pops are my favorite.  Both are pretty darn cute. 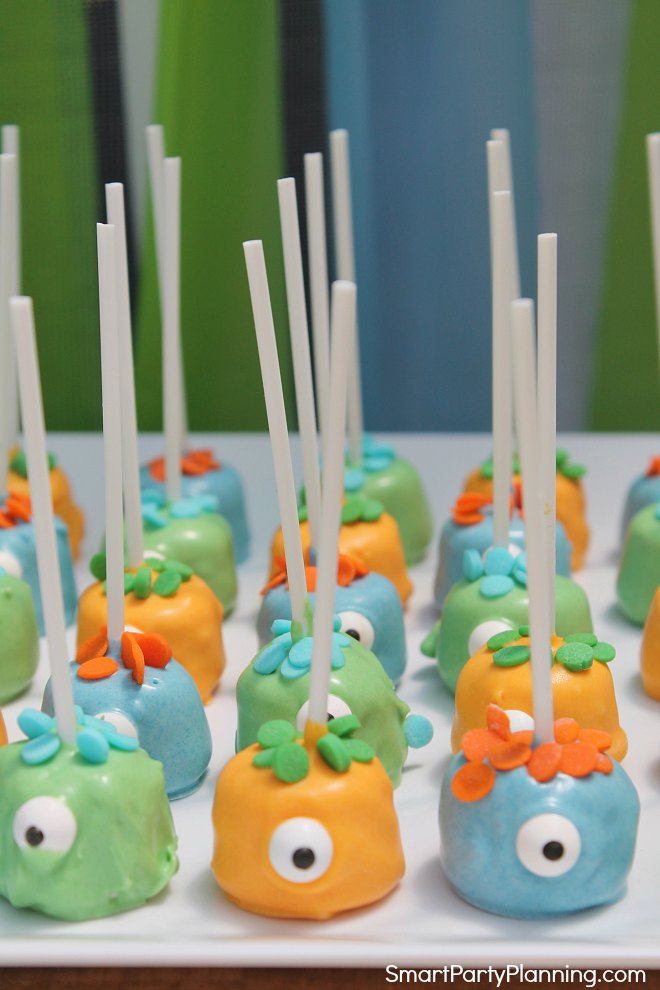 Not a big deal I thought, I’ll throw something together on the day.  I did have a ‘little’ freak out moment on the day when I realized I didn’t have a plan, but these monster marshmallow pops are the result. 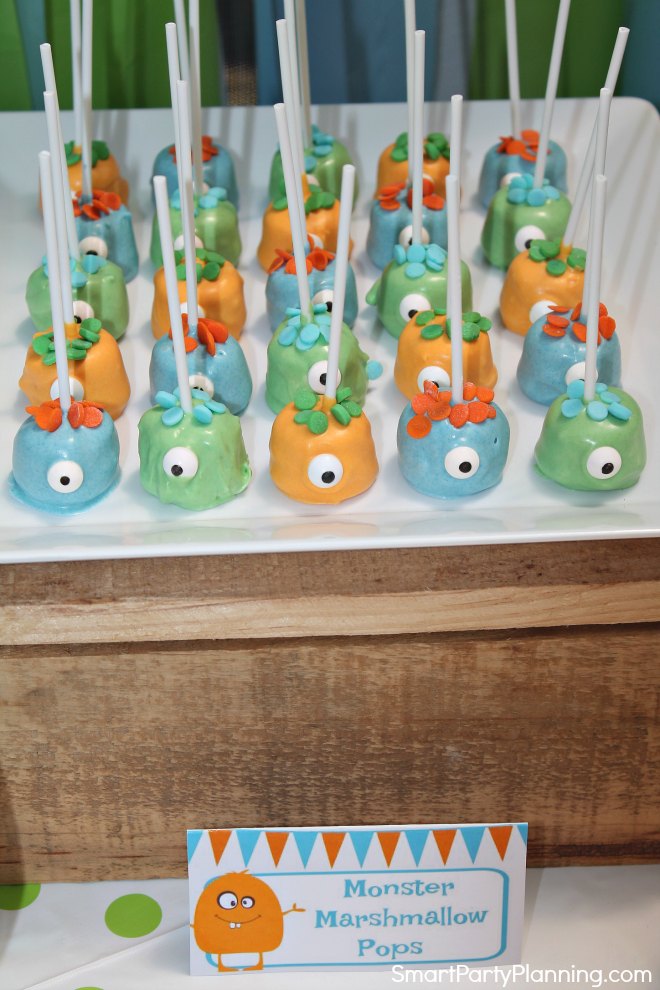 I am pretty chuffed with how they turned out and the fact that I put them together at the last minute with ingredients I had lying around for the party, shows how easy they were to make.

Now, you can make them too.

Ingredients You Will Need

Grab the following ingredients and you are all set to make these adorable monster marshmallow pops.

I am going to go through the steps of how to decorate the monster marshmallow pops.

If you want to know how to make marshmallow pops from scratch, then I suggest you follow the easy tutorial.  There is a knack for not melting the marshmallow and getting the stick to actually stay put!

The color scheme for the monster party was green, blue and orange.  I therefore used white candy melts and made three pots of colored chocolate to dip the marshmallows in.

You can use colored candy melts, but I bought a bulk bag of white candy melts to use on other party snacks and to save money.  This however then meant that I had to make up the different colored chocolate.  Do whatever is easier for you!

As the chocolate dries quickly I made one color of monster marshmallow pops at a time.  So for instance, I made all the blue pops, then the orange ones and then the green ones. 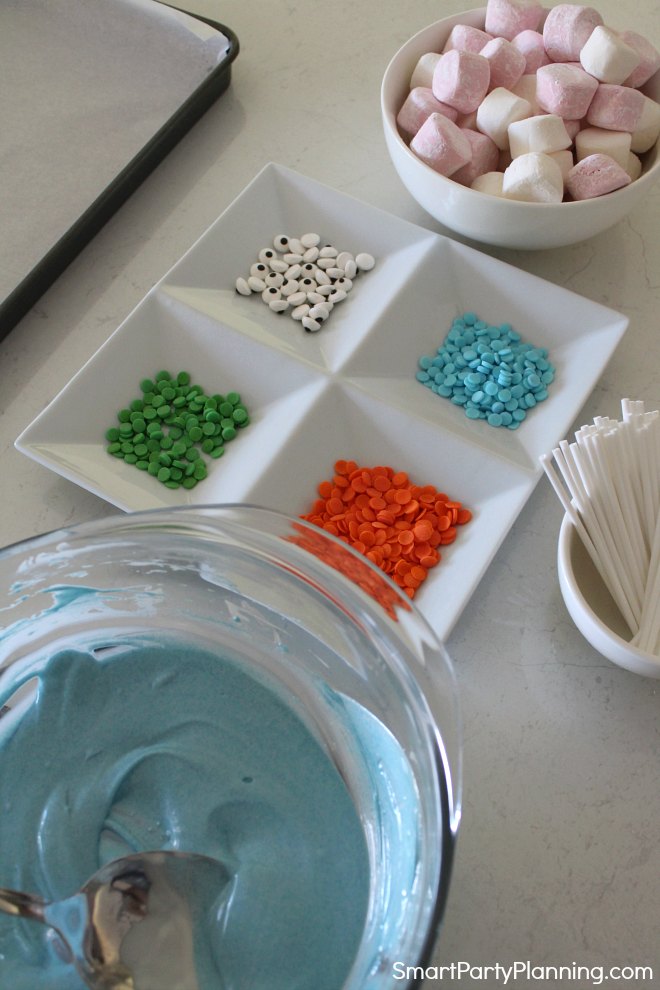 Tip: Don’t make the mistake of covering all the marshmallows in chocolate first, otherwise when you come to add the hair and the eyes, the chocolate will have dried too much for them to stick!

Step 1: Before I covered the marshmallows with chocolate I laid out all the ingredients that I would need to make the monster marshmallow pops.

Whilst they are easy to make, they are a little fiddly, so it is advisable to have every to hand for easy reach. 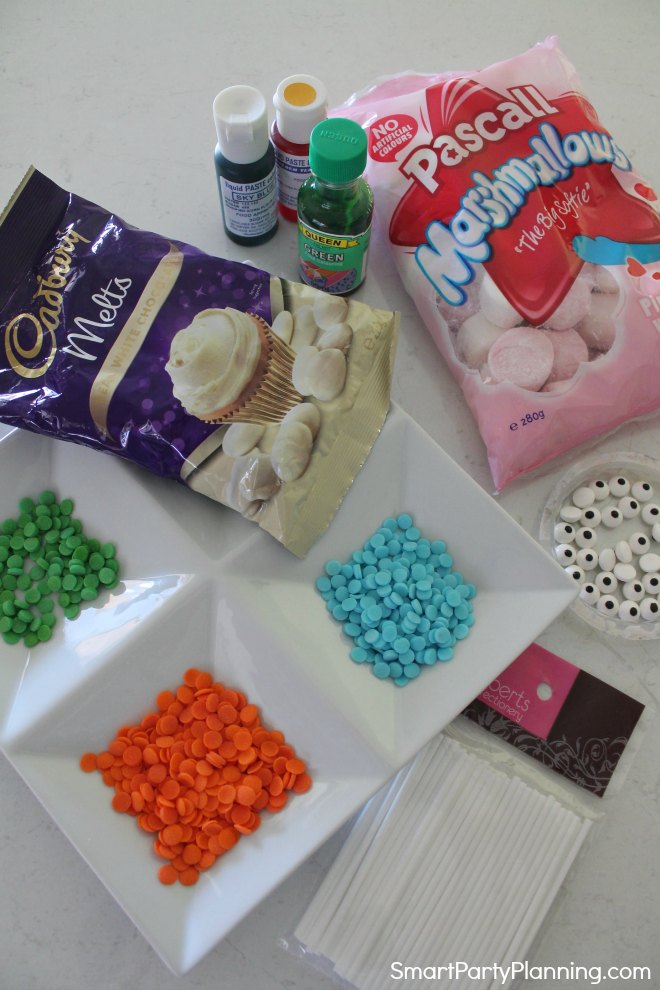 Step 2: After the marshmallows were covered in chocolate I placed them immediately onto a lined baking tray.  This is where they will stay until they are completely hardened. 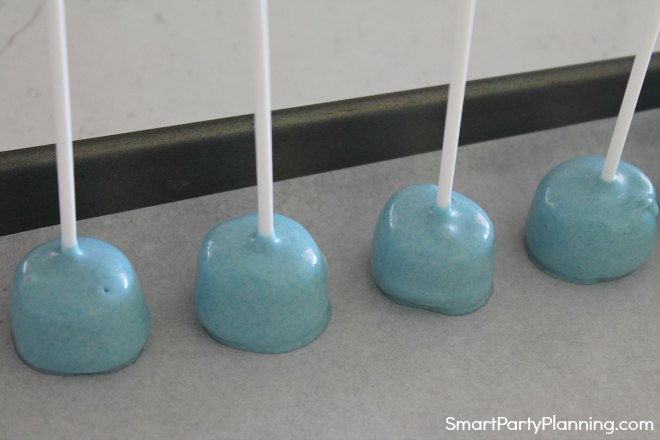 Place one row of marshmallow pops and then decorate.  Once decorated add another row.

If you try and fill the tray with all the chocolate covered marshmallow pops, then you won’t be able to get your hand in between the sticks to decorate them.

Step 3: I started by putting some hair on the top of the monster marshmallow pops using edible confetti.  Monster’s have crazy hair, so this definitely does not need to look neat.  They literally stayed as they fell. 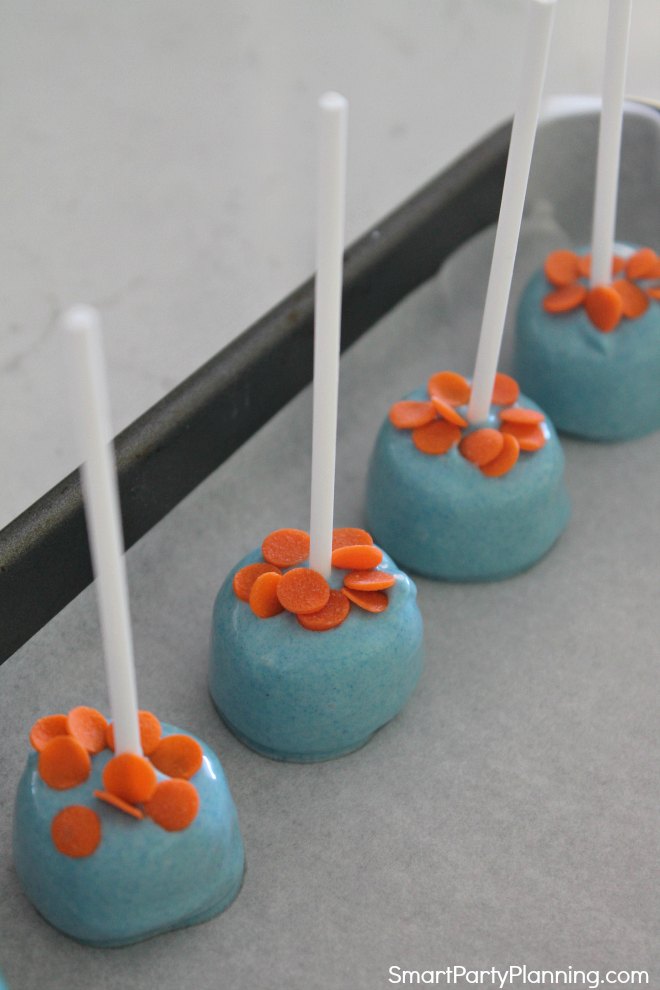 Step 4: After the hair was in place, I placed a candy google eye onto the front of the marshmallow.  I was low on candy eyes at this time, because I had also used them to make monster cupcakes.  I therefore used one eye per marshmallow pop.

You could however try using two eyes on some of them to mix it up.  I think that the one eye was still pretty effective though. 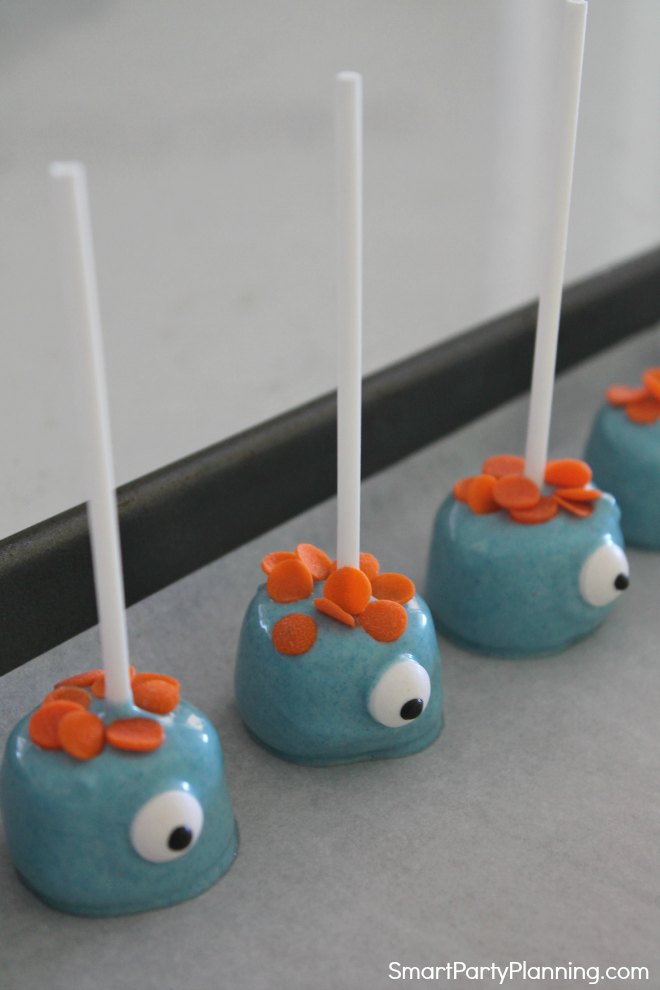 Repeat steps 2-4 until all your monster marshmallow pops are complete. 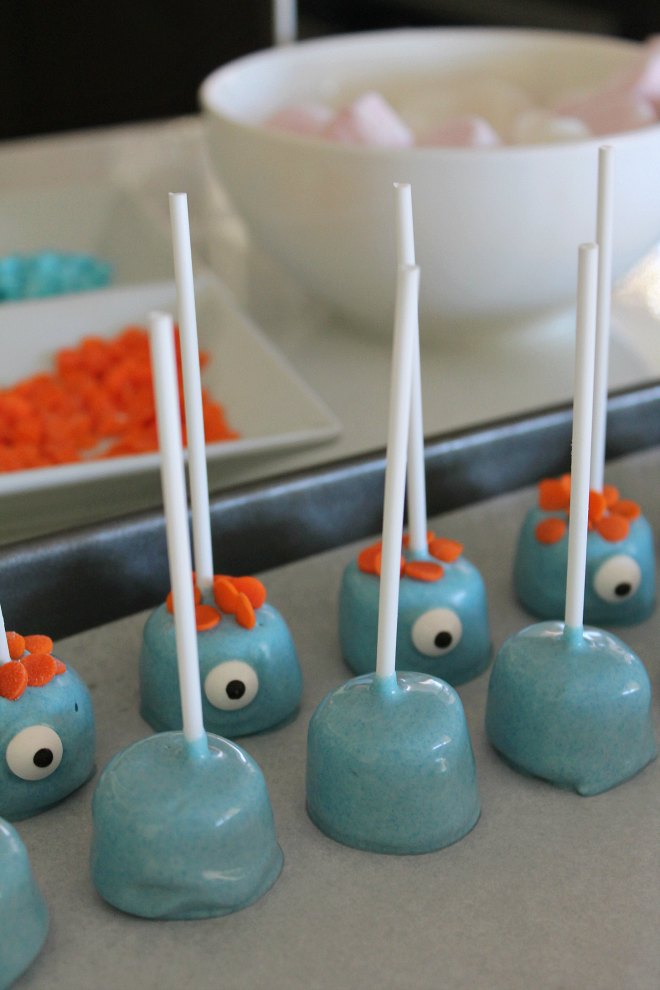 And that’s it!  Now just put the tray aside and allow them to completely set before you attempt to move them off of the tray.

How amazing do they look? 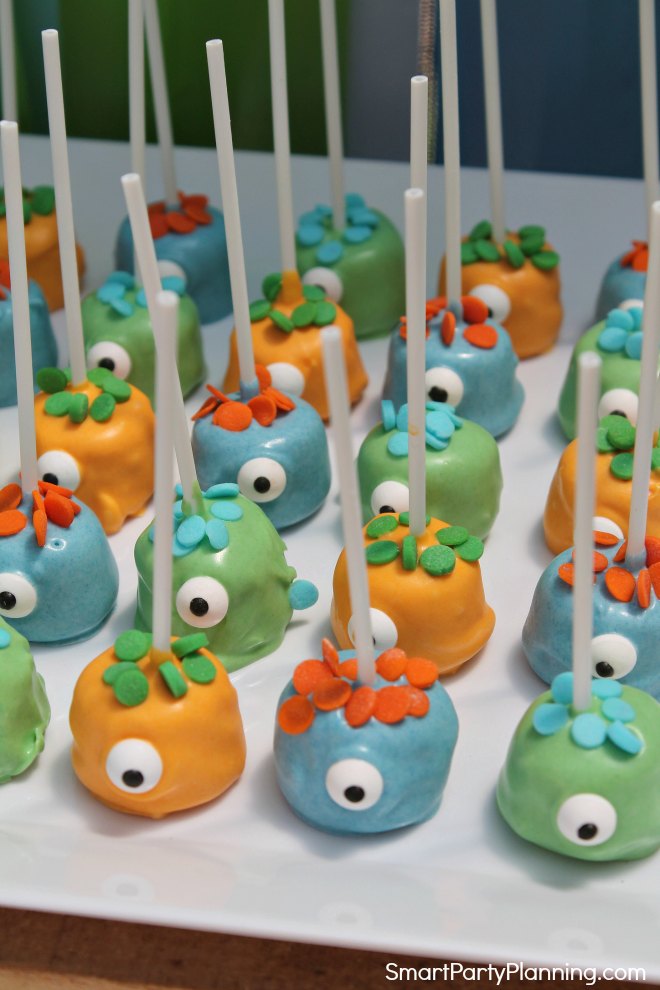 I always make my marshmallow pops the day before the party.

However, they are just chocolate and marshmallows so you could easily make them a few days before and they will still be perfectly fine for the party.  We always have left overs (because I make way more than we need) and they are still great even a week after the party.

If you are planning a monster birthday bash, I totally recommend that you add these monster marshmallow pops to the food list.  Everyone will absolutely love them.

Are you going to give them a go? 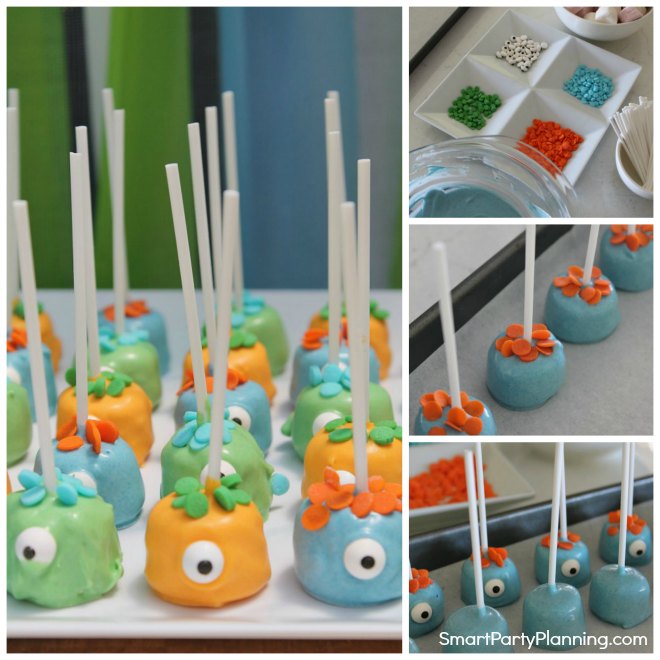 Let’s stay in touch.  Did you love the easy monster marshmallow pops?  Sign up to the newsletter so that you never miss out on future party, recipe or printable ideas.

© Catherine Holt & Smart Party Planning. Unauthorized use and/or duplication of this material without express and written permission is strictly prohibited. All content/photos are property of blog owner. One photo per post may be used, provided that full and clear credit is given to Smart Party Planning.
552 shares