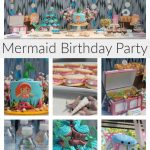 This will be a party your little girl will be dreaming about for years to come.

I have been meaning to share my daughter’s mermaid birthday party for a very long time. It was held for her 3rd birthday and the theme was 100% her choice.

She had become pretty obsessed with mermaids and chose the theme months in advance of her birthday.

That’s great for my planning!

I wanted to stick to blue and white for the colour scheme, but my daughter was insistent on adding pink, so add pink we did!

For all the parties I hold, I keep the decoration simple and very cost effective.

To create the backdrop I simply used long blue crepe paper which I twisted to form a swirling sea effect. I then cut out blue and white circles of varying shapes to act as bubbles.

The end result was really effective. 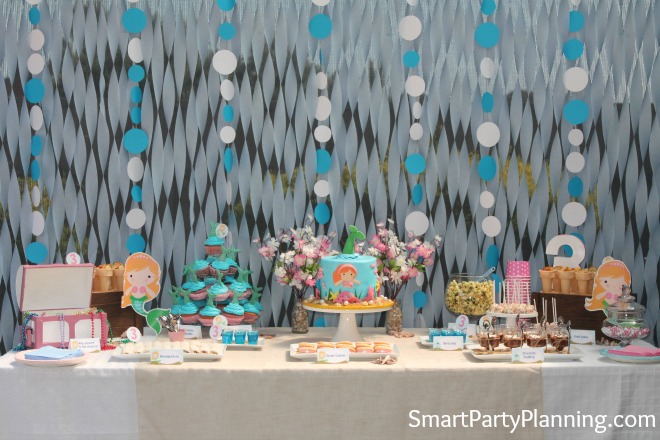 Whilst it wasn’t technically mermaid, I really wanted to have these cute jelly fish decorations.

Again they were incredibly easy and cheap to make and they really brighten up the place.

We literally hung them all over the ceiling! 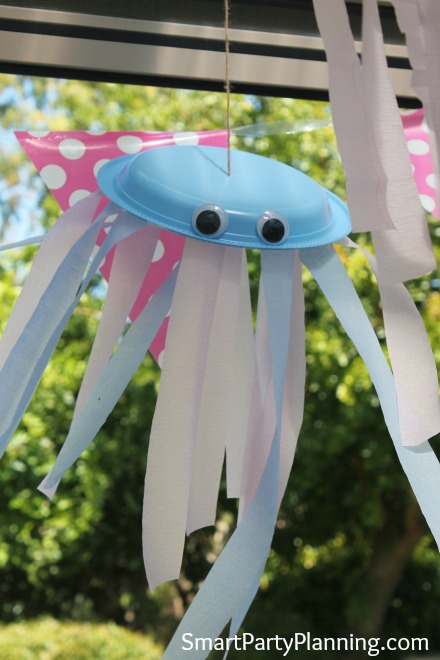 A 3 year old’s party wouldn’t be complete without balloons, besides I love them just as much as my daughter, so we had a few helium filled balloons to fill in the gaps at the end of the food table. 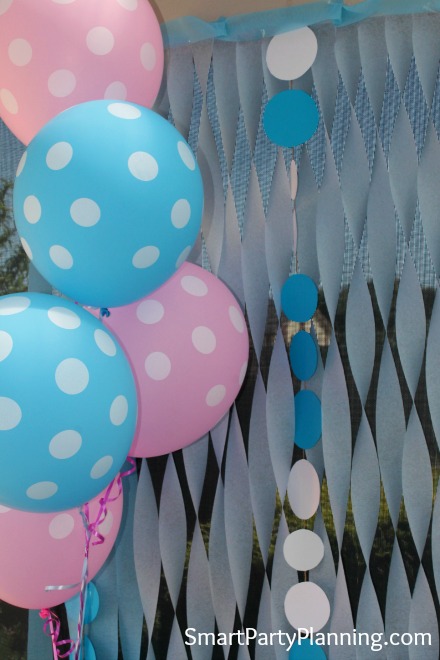 I found these stunning flowers by chance and knew instantly that they would help fill in the table background and also give a lift of colour.

I am so glad I used them as they were incredibly pretty and they really set the table off. 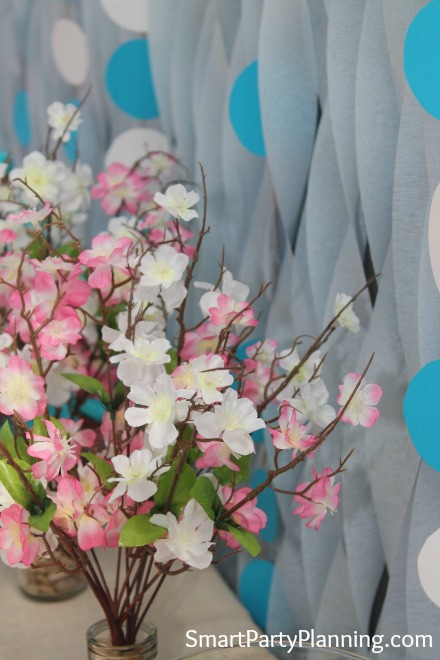 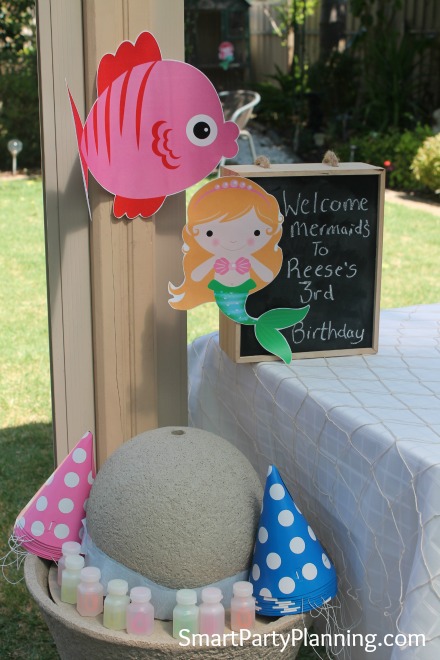 Just for some extra fun, I added a treasure chest full of beads, rings and chocolate coins.

The children were able to help themselves during the party which they were really excited about. 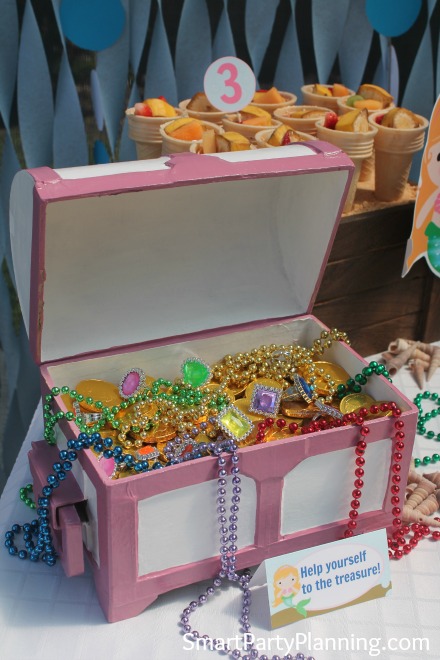 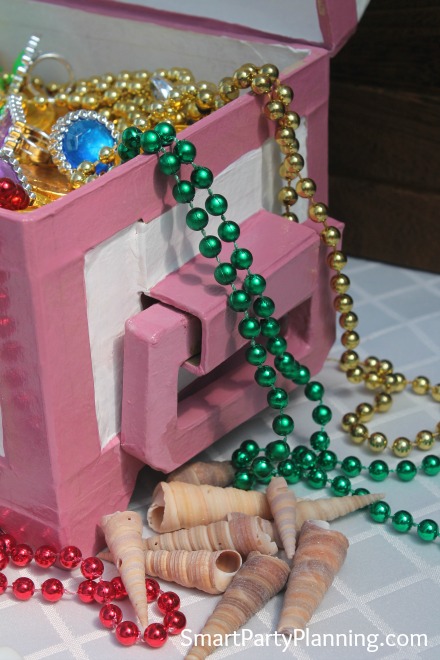 I love creating themed food for a party. It is an easy way to bring a theme to life and it’s really not that hard to do. A few simple treats make all the difference and the kids absolutely love it.

One thing that I do not create for my kids parties is the cake. I prefer to have this made and then used as a highlight on the party table. It is then easy to create some little treats to cover the rest of the table.

The cake for her mermaid party didn’t disappoint. All I can say is that it tasted as amazing as it looked.

My daughter’s face was priceless when she saw it, she literally gasped. If only I could have bottled that moment. 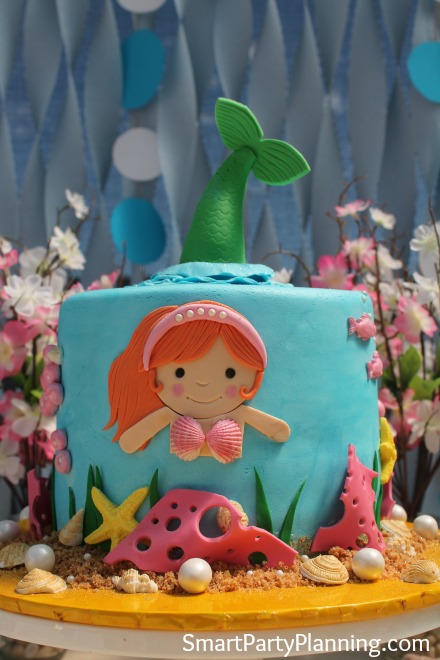 Once you have a stand out piece on the table, the rest of the food can easily be created around it.

For some simple mermaid birthday themed food I opted for the following;

It was seriously a dessert feast, but my daughter loves her treats and it was a party after all. 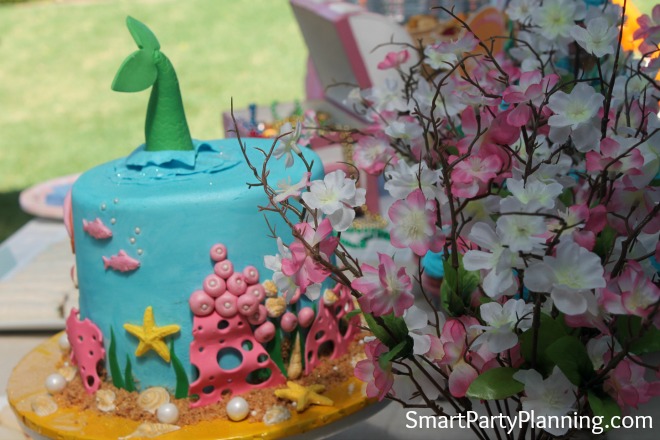 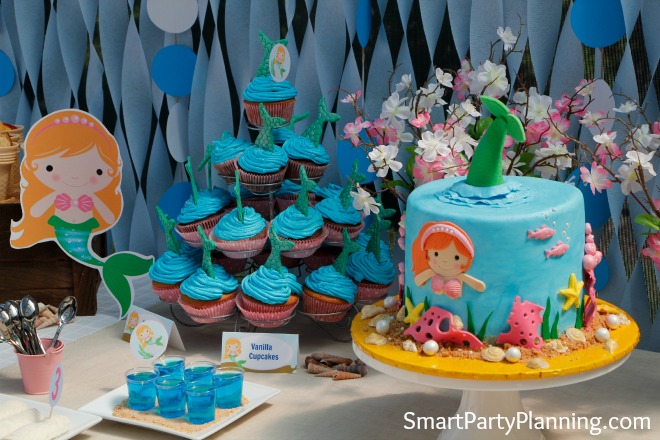 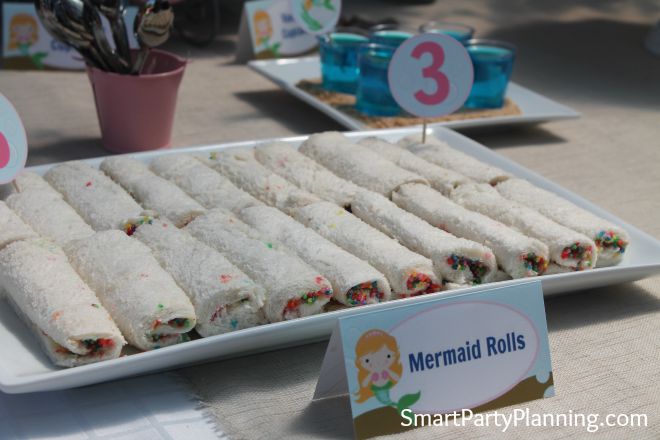 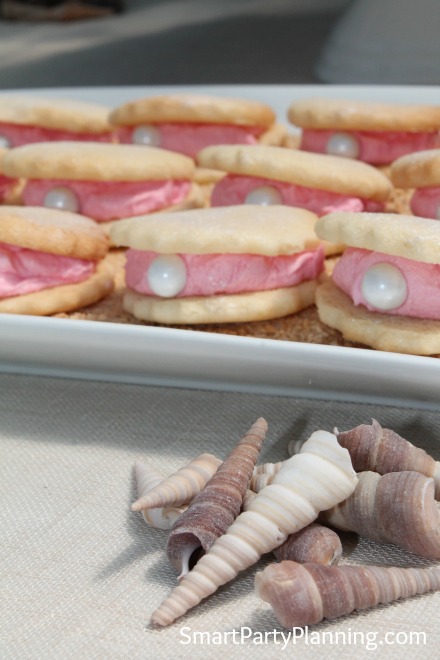 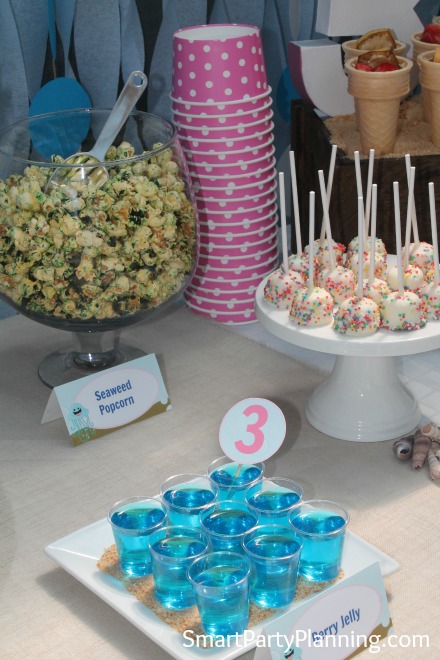 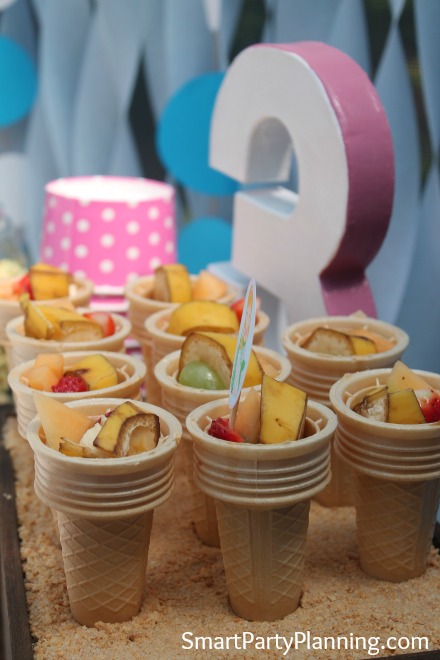 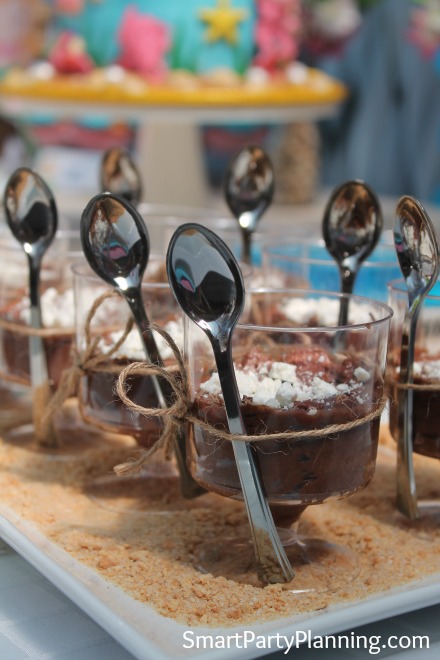 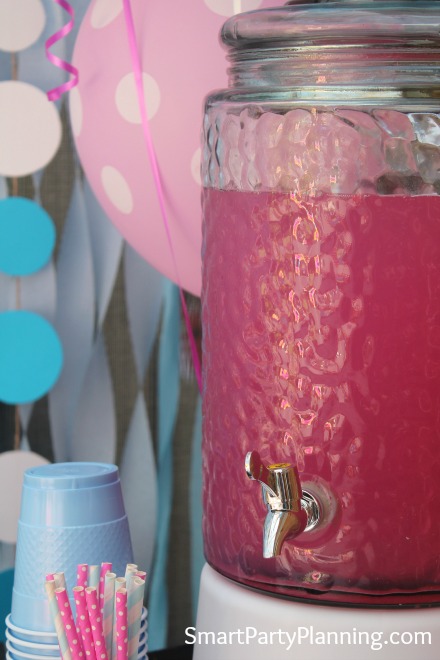 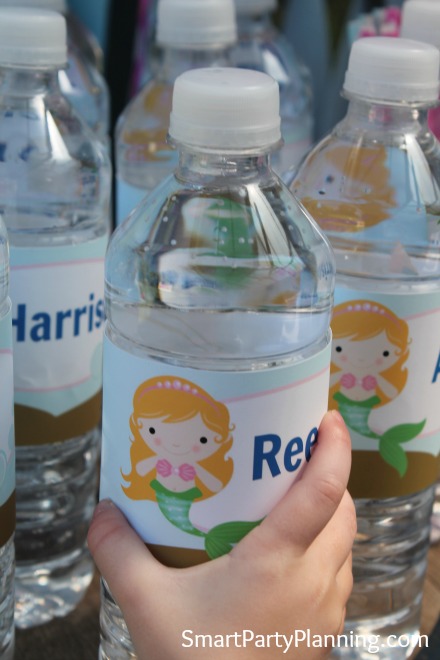 We decided to do something a little different with the party favors and kept them more to a beach theme. There were also quite a few boys coming to the party so I didn’t want to give them girly favors.

We made the party favors part of the party activities, by giving all the kids a bucket and a mermaid map.

The kids then followed signs placed around the garden where they picked up little items to fill their bucket. They had an absolute ball and many of the parents told me that this was the kids favorite activity. 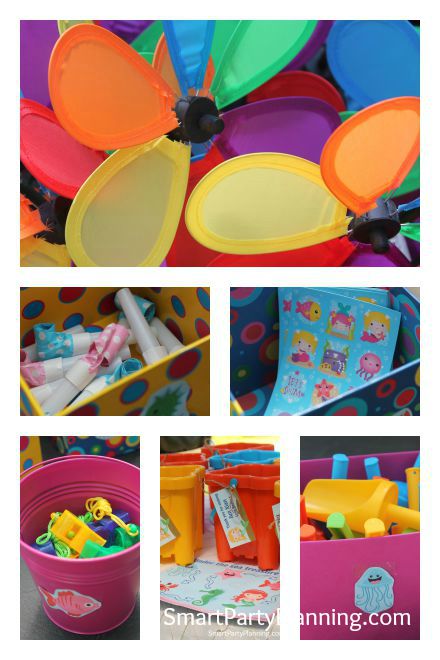 I used the same mermaid that had been on the invitations, food tents and cake as a “pin the flower on the mermaid”.

I placed a yellow spot in the mermaid’s hair and each child had a flower which they had to place as close to the spot as possible. 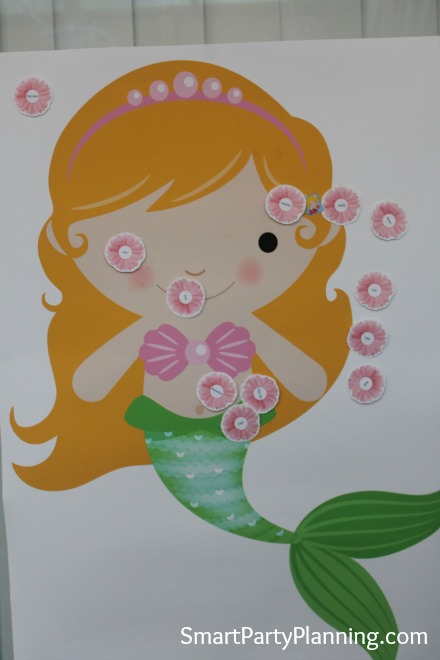 The mermaid birthday party was an absolute success. My daughter had an absolutely wonderful time and the smile on her face really said it all.  Here is a little pic of our family just before we cut the cake. 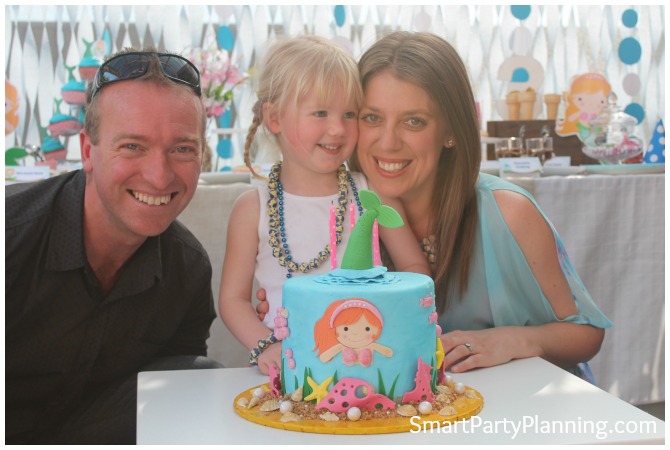 A mermaid party is really a magical theme for young girls. It’s incredibly pretty and brings the kids into another world. With just a few simple DIY decorations and treats, it is easy to transform an area into a mermaid wonderland. The kids will definitely thank you for it!

Need some ideas for a different theme? Check out the ultimate guide to easy girls party ideas. You will have a ton of inspiration for different themes, games and more.

Let’s keep in touch. Did you love this mermaid birthday party? Sign up to the weekly newsletter to be kept up to date with other easy party ideas, decorations and recipes. You will also have access to the library of free printables. See you there!

© Catherine Holt & Smart Party Planning. Unauthorized use and/or duplication of this material without express and written permission is strictly prohibited. All content/photos are property of blog owner. One photo per post may be used, provided that full and clear credit is given to Smart Party Planning.
161 shares