You are here: Home / Parties / Girls Parties / How To Create An Easy Frozen Party The Girls Will Love
300 shares 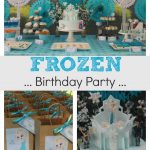 Easy Frozen party ideas which will wow the little guests. This is a birthday party for girls that they will remember forever.

With simple food, decoration and printable ideas, this is an easy party to replicate that the kids are going to absolutely love. 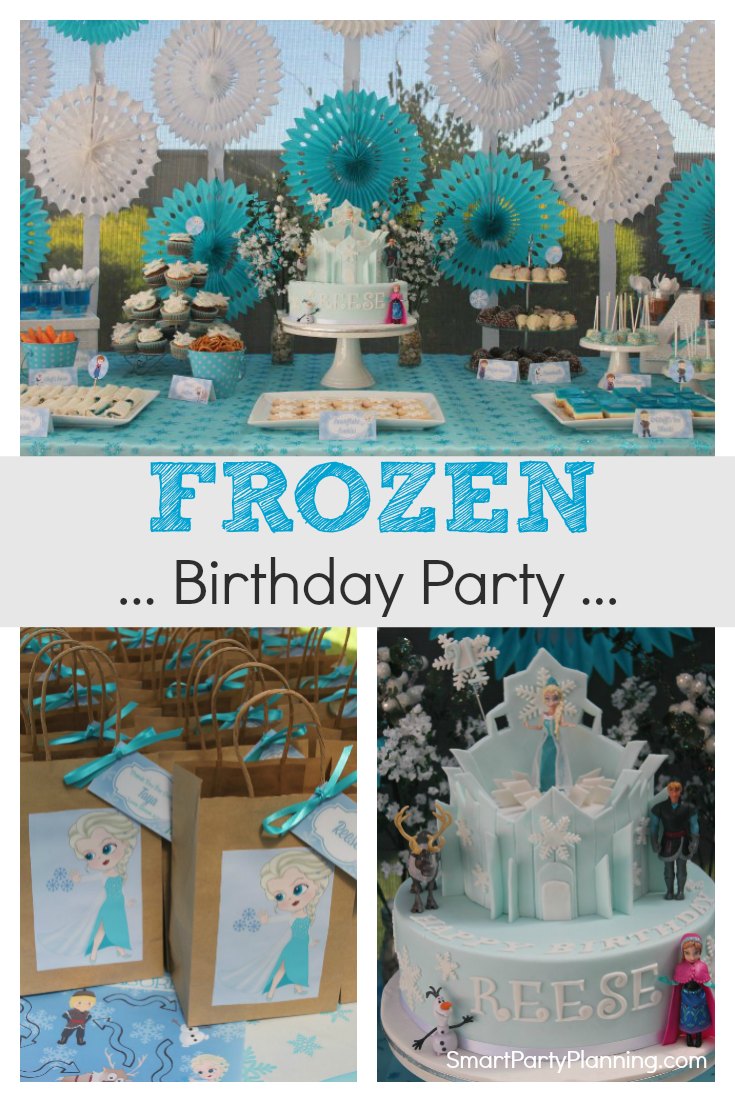 One thing that I seem to be really bad at is showing you the parties of my own kids. Take for instance this Frozen party I held for my daughter’s 4th birthday.

Yes, a bit behind schedule arn’t I!

When we held this party, Frozen was all the rage. I had watched the movie like a bazillion times, and if that wasn’t enough we had the CD blaring out “Let it go” over and over again.

She had the dress ups of both Elsa and Anna, plus the hair piece, crown, gloves. You name it, she had it. Then suddenly it was all over.

She still watches the movie, like every six months or so, but that Frozen craze has well and truly had it’s day. She is far too ‘cool’ for all that baby stuff now. So she tells me!

At the time you think it’s driving you crazy and that it will never end. But looking back now it brings magical memories and that Princess age is one I will treasure forever.

She remained in the Princess phase for her 5th Princess birthday party, then it moved to a Trolls themed birthday party and most recently she had a rock star party for her 7th birthday. How did it change so quickly?

The Frozen party was however a delight to hold. It was a super hot day, but the decor was so light and refreshing. All the little girls came dressed up in their Frozen gowns and they looked simply amazing. 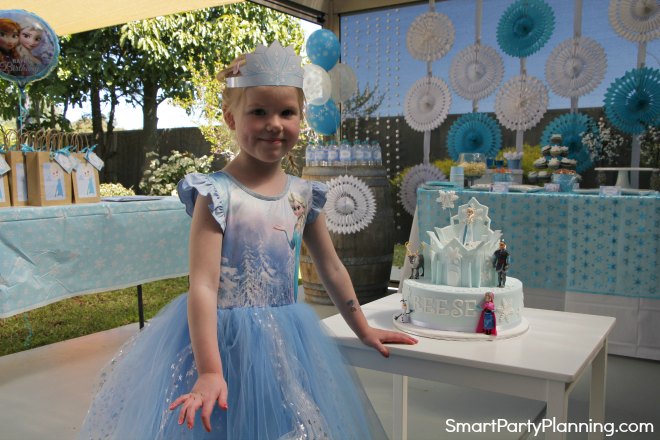 Whenever I hold a character themed party, I try not to go overboard with the character decorations. There are two reasons for this.

1: I think it’s cheaper to think outside the box a little and steer away from all the themed merchandise

2: It allows me to be a little more creative

Whilst we did of course have lots of Frozen character items, I wanted the main decor to resemble the snow. 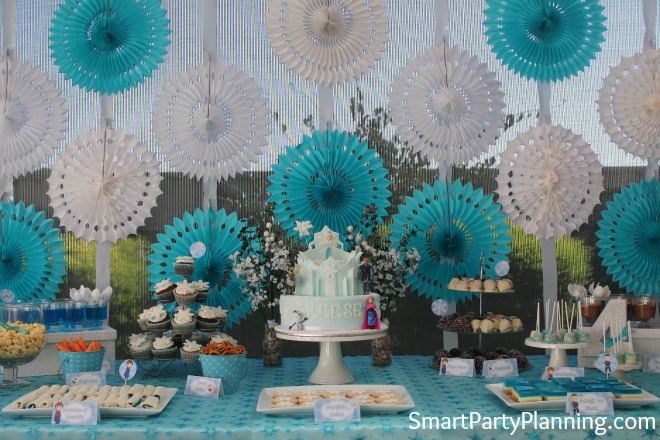 Behind the party table I hung a backdrop that consisted of simple white tissue paper and blue fans. It was so easy to prepare and super cheap too.

At the top of the fans I placed a Frozen merchandise happy birthday banner purely because it hid all the sins of the streamers I had hung!

I found a gorgeous snowflake glittery piece of material which we turned into a tablecloth and it looked stunning. 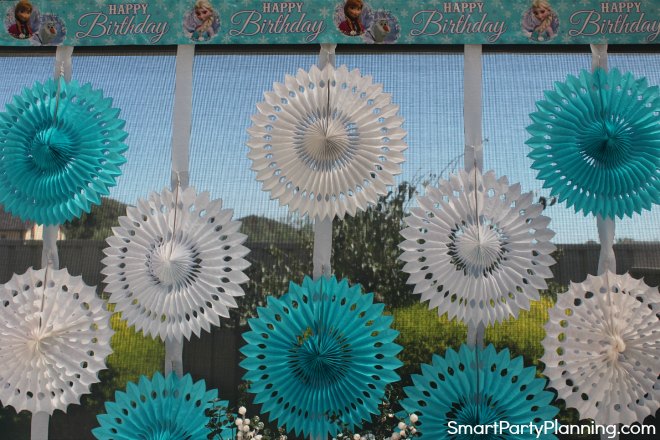 At each side of the party table hanging down beside the fans, I created some hanging snowball streamers.

This was easily completed with some small polystyrene balls which were threaded through the middle. It framed the fans and the table beautifully. 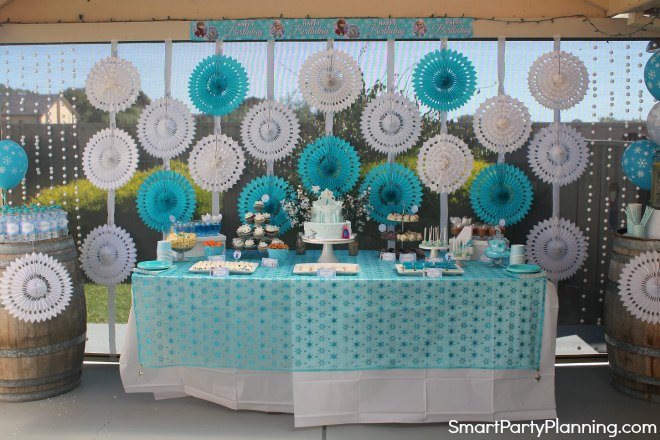 These printable’s really helped to bring the Frozen theme alive.

I was also pretty excited to find some fake snow which I sprinkled around the water bottles. The kids were absolutely fascinated by it. 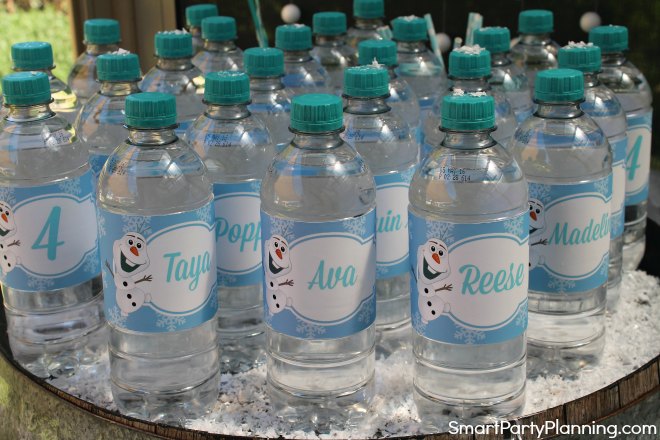 Preparing the food is always fun, and I try to theme it as much as possible whilst also keep it incredibly simple.

I don’t like fussing around with baking, so simplicity is the key.

My friend made me a beautiful castle cake which we decorated with Frozen figurines. This was definitely the highlight of the table which created many gasps from the kids. 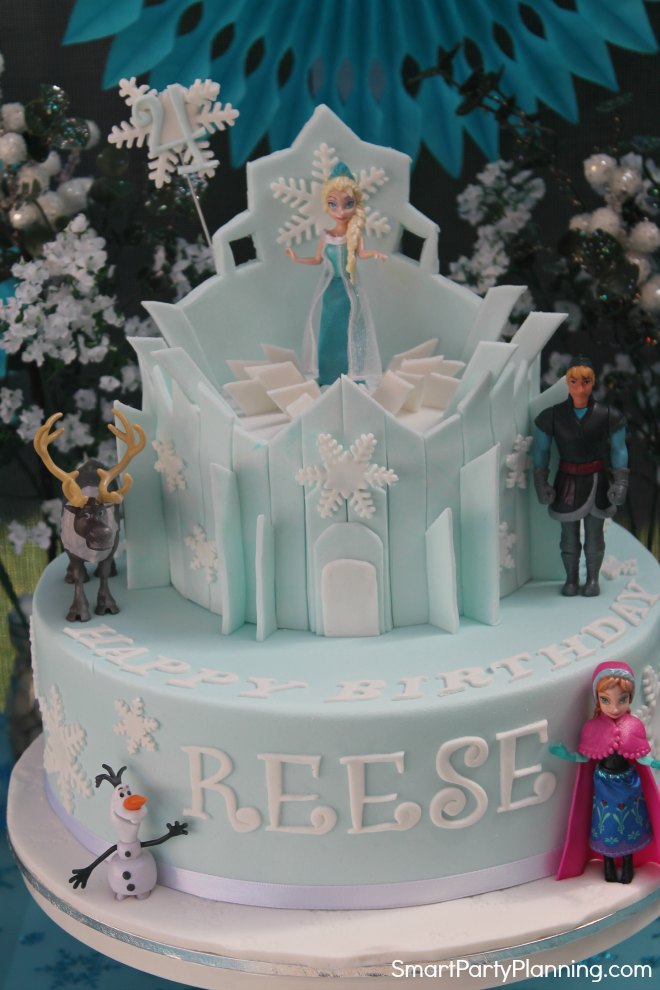 I always make the cupcakes myself and created them with a fondant snowflake and edible glitter on the top. 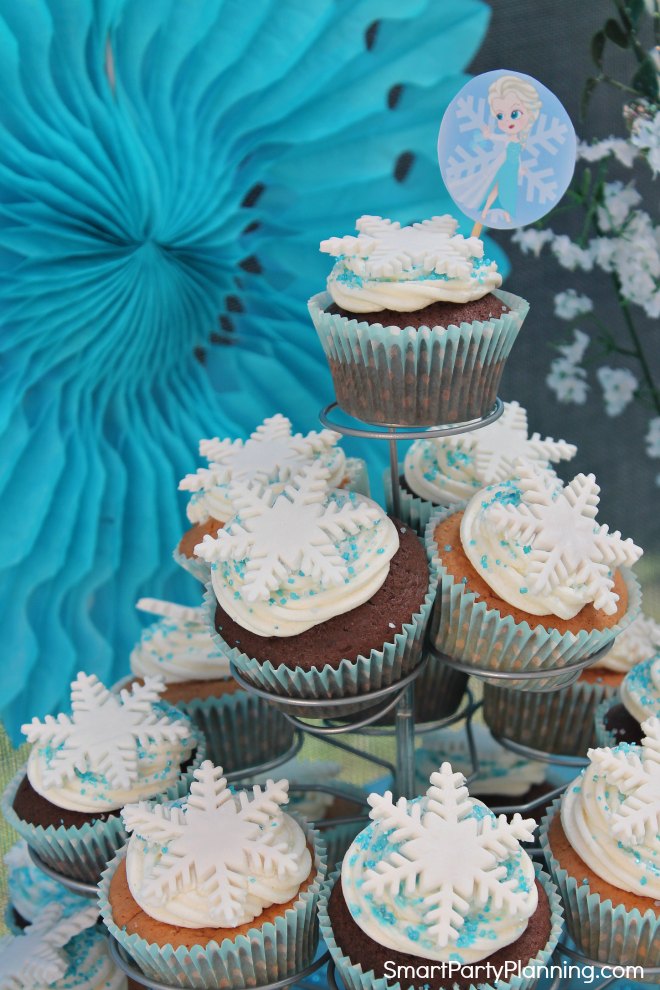 Even though the food was pretty simple we tried to theme it. For example we had:

It was a bit of a sugar table, but my daughter loves her sweet food and it doesn’t hurt once in a while! 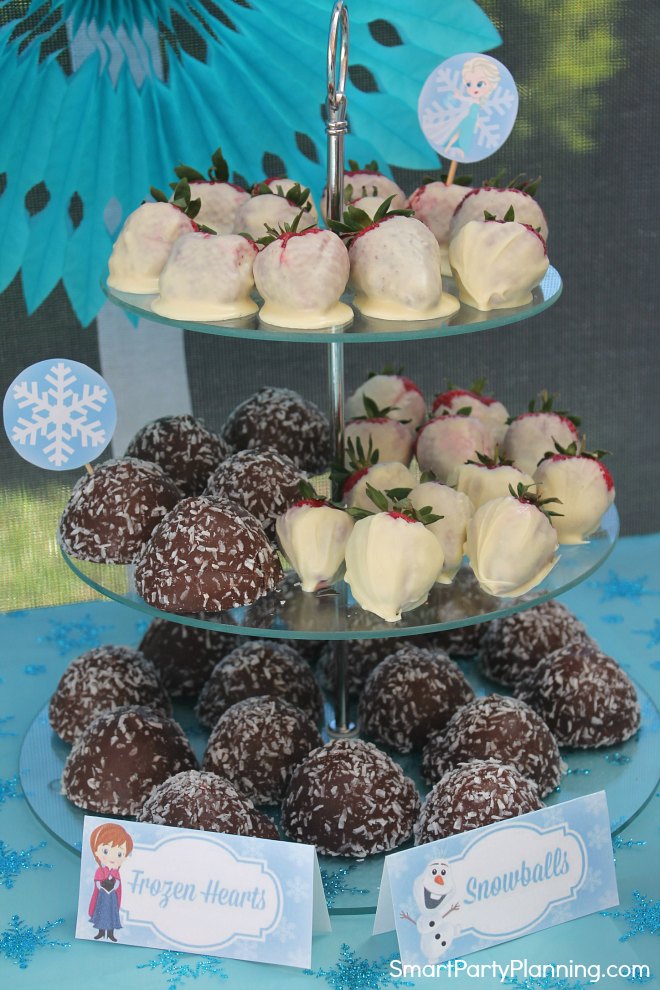 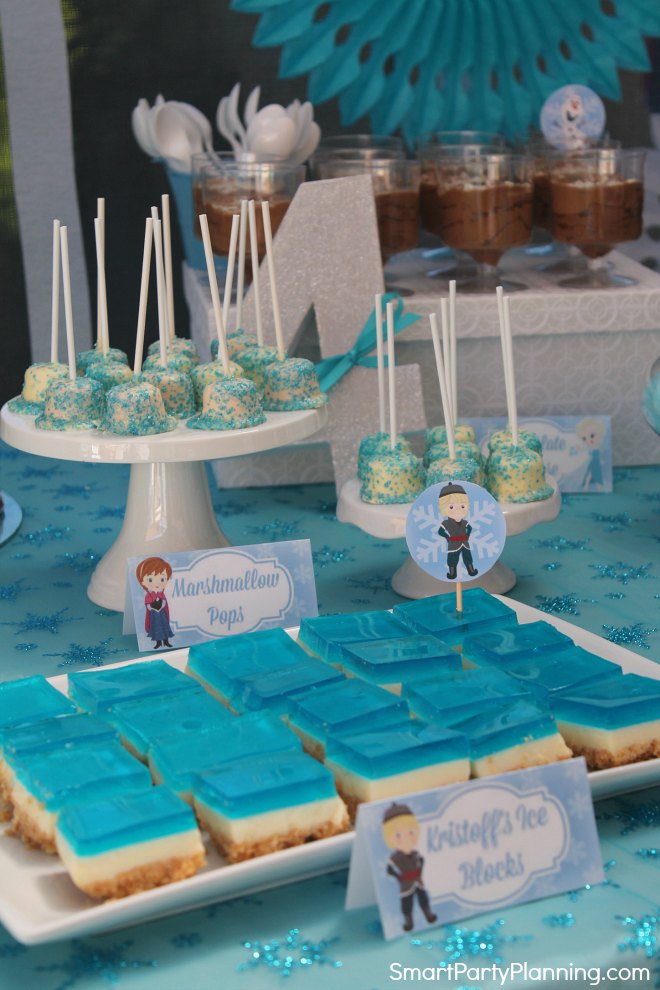 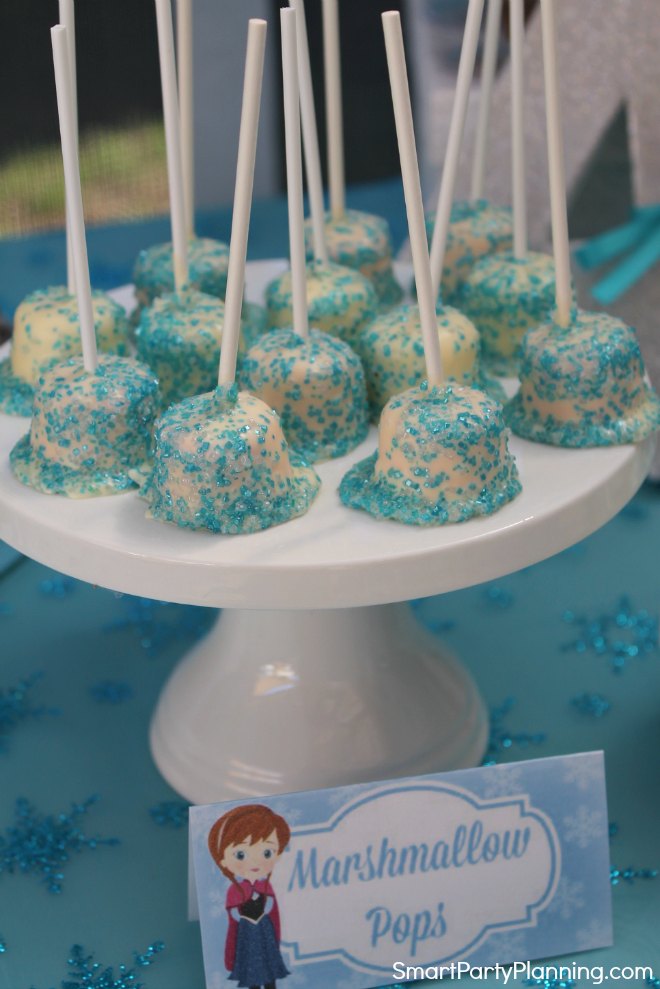 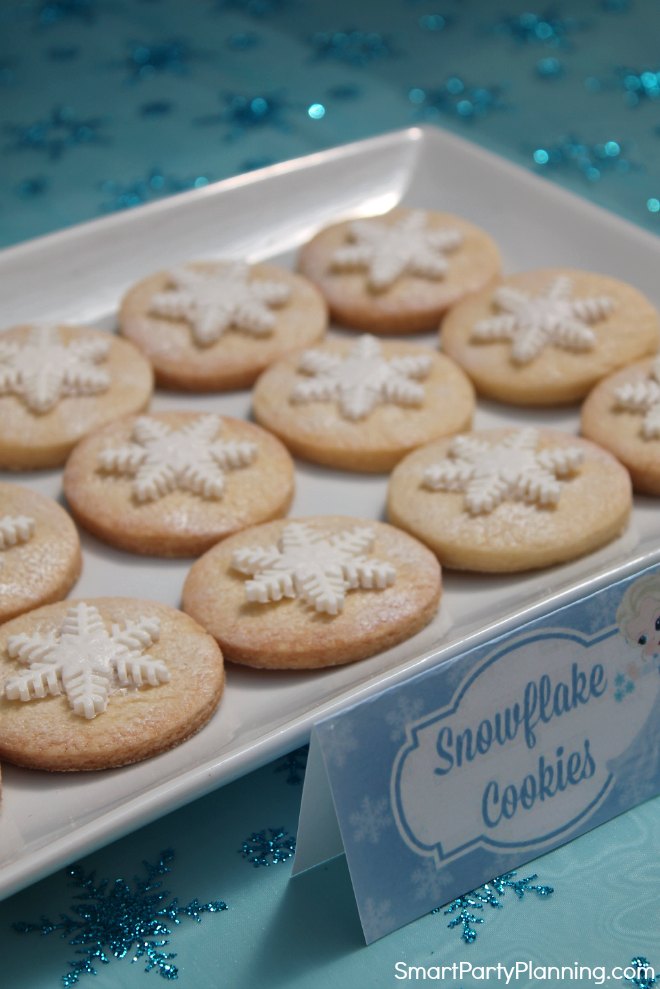 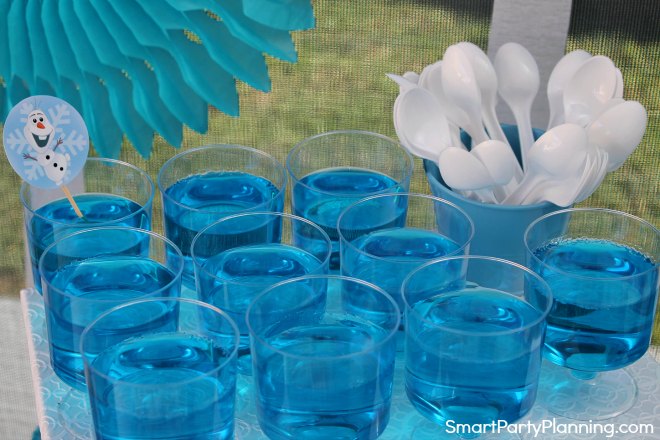 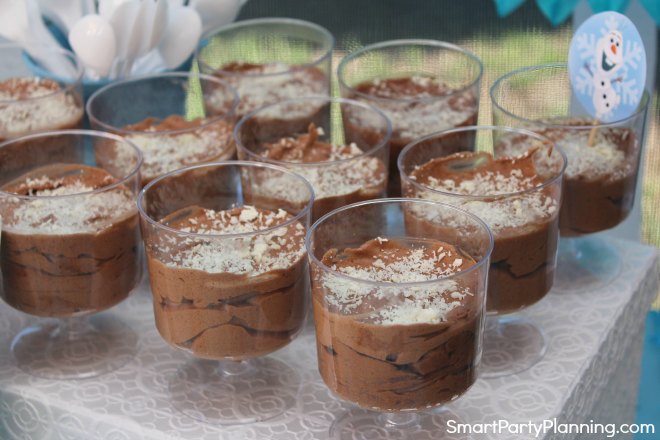 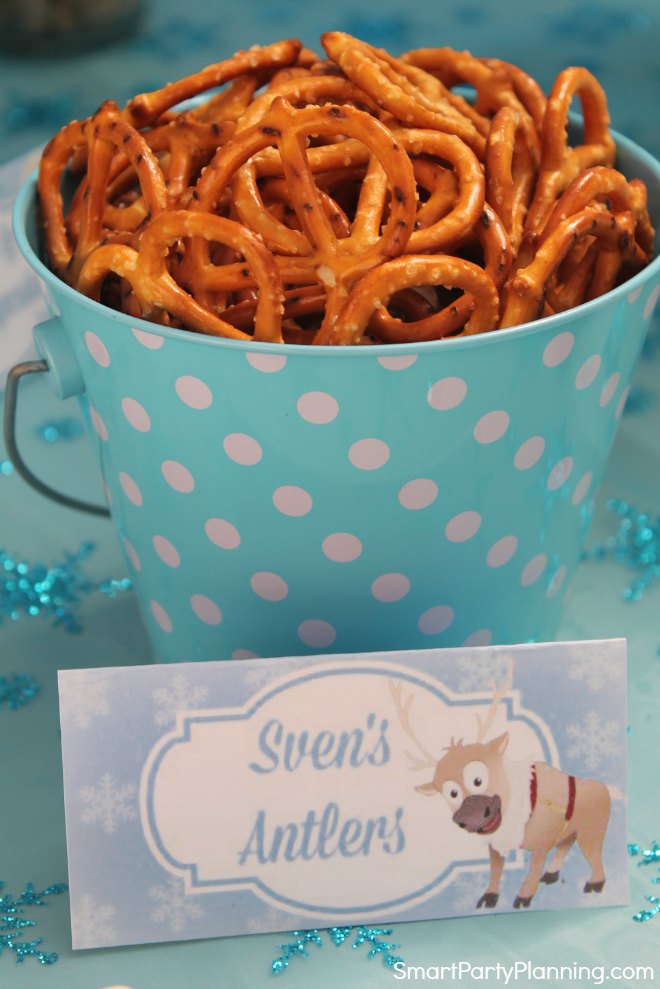 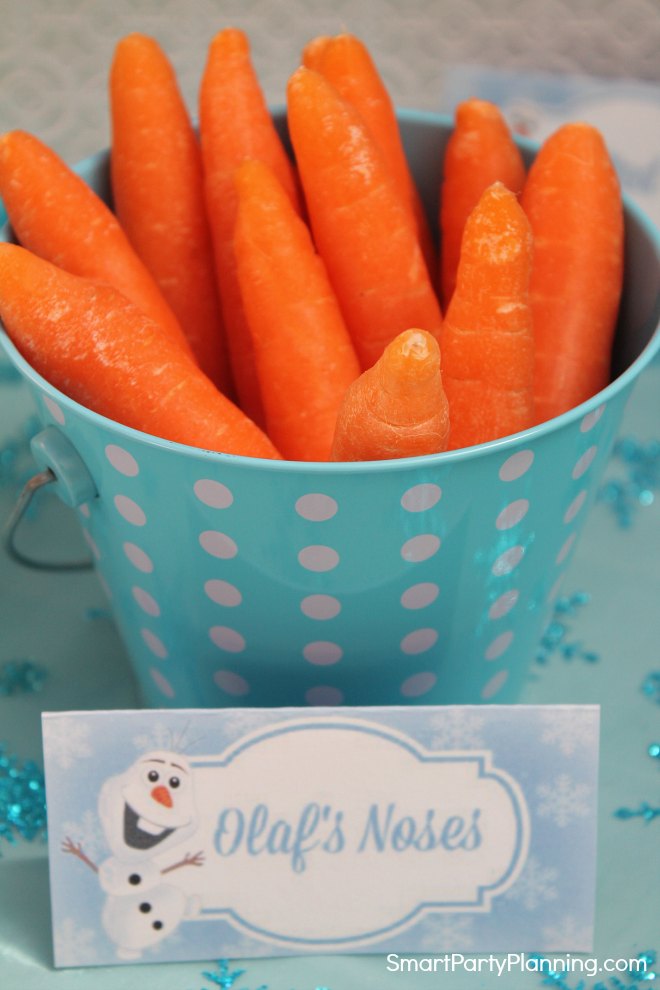 Rather than hand out a party bag when the kids leave a party, I try and make it a bit more fun and incorporate it into a party game.

I made a map of six Frozen characters and placed print out’s of those characters around the garden. All the kids were given a favor bag and a map.

As a group the children followed the map to collect their favor items and placed them in their bag. They absolutely loved it.

I always find the treasure trails are an absolute hit. 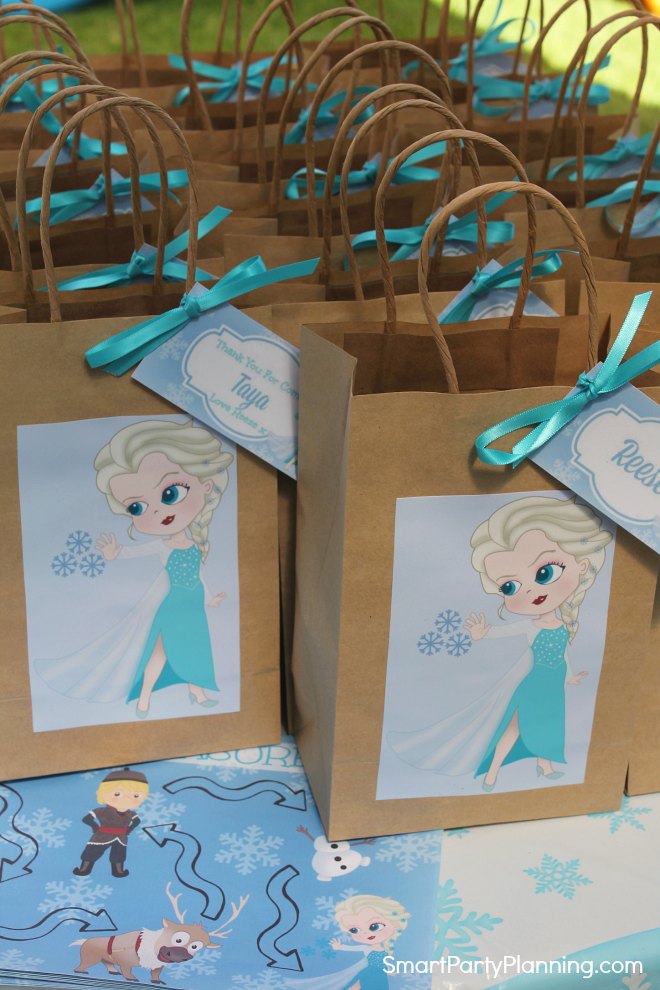 I purchased some large polystyrene balls and had three laundry baskets handy. I placed a number on each laundry basket (1, 2 and 3) and placed them in a triangle on the ground. Numbers 1 and 2 were at the front with number 3 at the back.

The children were then given 6 balls and standing behind a line undertook a snowball toss. The points were added up depending which laundry basket they got the balls into. The child with the highest score was the winner.

A coloring station was set up with Frozen coloring sheets. This was great for when the kids needed to have a bit of quiet time during the party, or for when they first arrived and were settling in.

A kids party isn’t a party without some traditional party games. The kids loved to play pass the parcel so we always include this.

For musical statues, they danced to the song “let it go”.

All the games were simple, but the kids enjoyed each and every one of them. 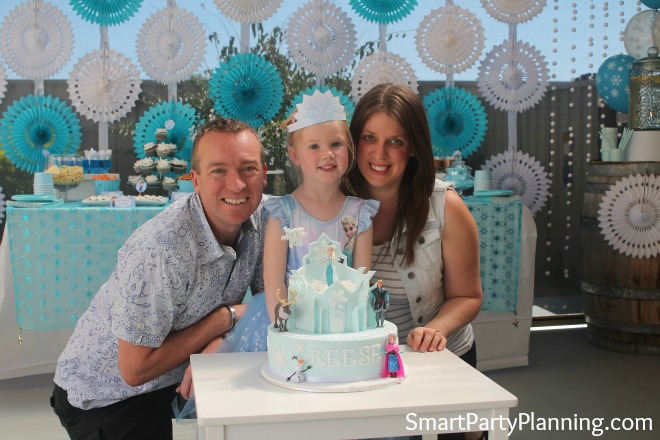 If your little girl loves the Frozen movie, this is an ideal party theme for her. It’s gorgeous to create and certainly has a magical feel to it. It will be one of those parties that you will definitely remember forever. 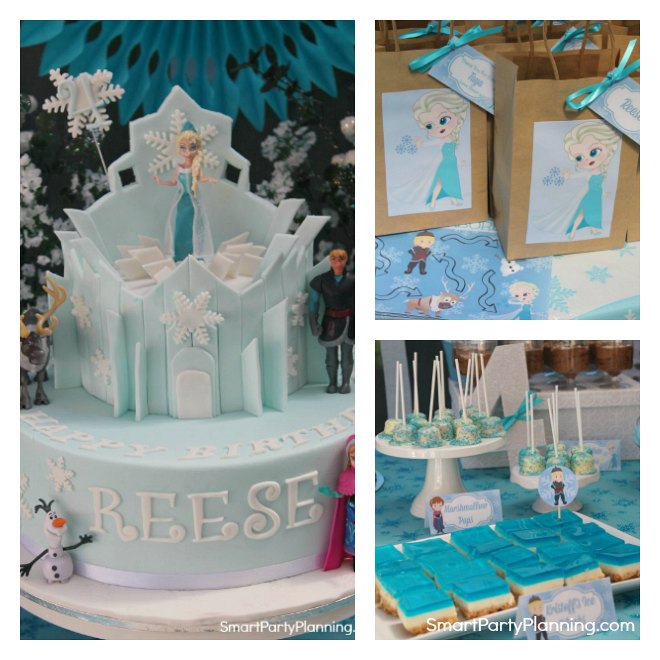 Need some ideas for a different theme? Check out the ultimate guide to easy girls party ideas. You will have a ton of inspiration for different themes, games and more.

Let’s stay in touch. Did you love this Frozen party? Sign up to the weekly newsletter to be kept up to date with other easy party ideas. You will also have access to the free printable library. See you there.

© Catherine Holt & Smart Party Planning. Unauthorized use and/or duplication of this material without express and written permission is strictly prohibited. All content/photos are property of blog owner. One photo per post may be used, provided that full and clear credit is given to Smart Party Planning.
300 shares