This Dora the Explorer party is long overdue a feature on the blog, because let’s face it, this was for my daughter’s 2nd birthday and she is now…..4.  Oops!  Better late than never so they say!

I really enjoyed styling this party and it was one of the first that I did, so it still holds a special little place in my heart. 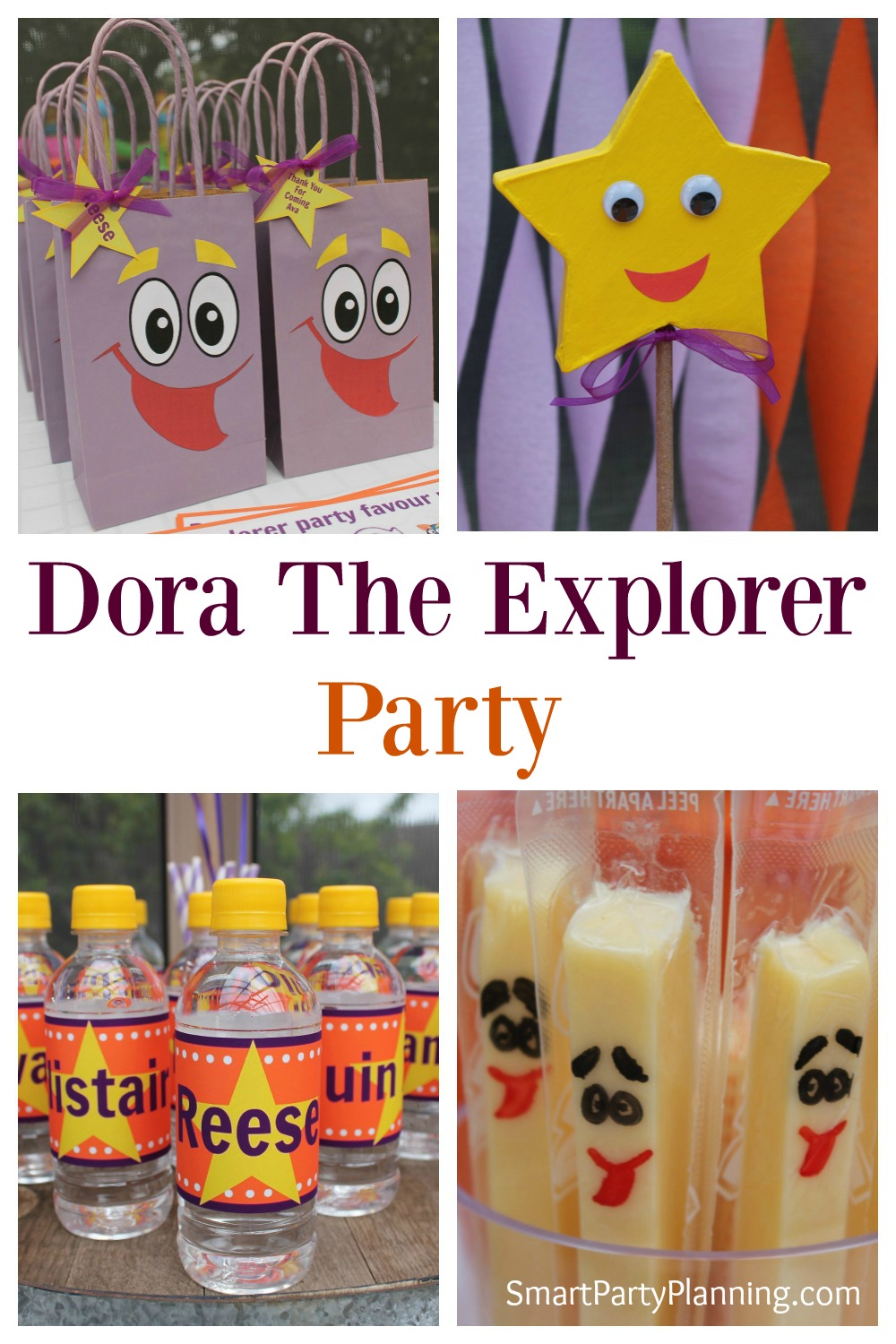 Even though my daughter is now 4, she still loves Dora, the catchy theme tune still rings in my ears on a constant basis.  It does at least now get intermingled with Frozen and Peppa Pig but, it’s still there!

Looking back two years, it was clearly evident what party theme she was going to have, as she was absolutely obsessed with Dora the Explorer.  She thoroughly enjoyed the party, which always makes it worthwhile doesn’t it!

I have to admit that I was slightly nervous about how I was going to decorate for this party.  Dora’s colours are not exactly….well…inviting, and I was reluctant to have Dora and the gang evident everywhere.  I decided to run with a bit of the Dora stars theme, and I think it worked really well.

I chose three main colours of yellow, purple and orange and stuck with this for the entire decoration.  It ended up being bright, fun and not at all garish like I initially thought it might be. 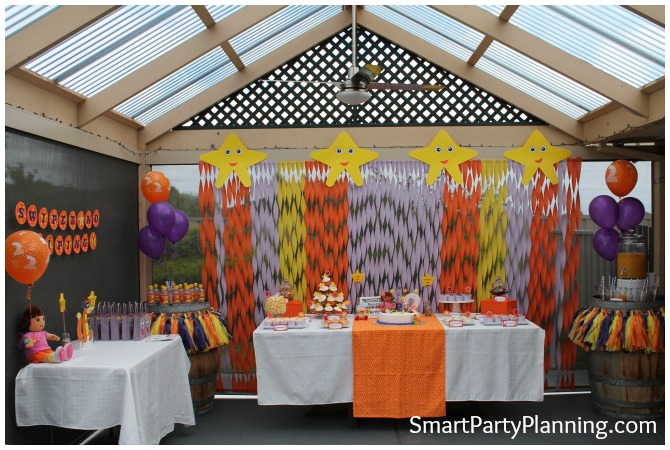 I decorated the backdrop with easy hanging party streamers which are fantastic for filling in colour but are also incredibly friendly on the budget….that’s always important right!  I also created some large Dora stars out of large yellow card and used these to create a pop of colour at the top of the background. 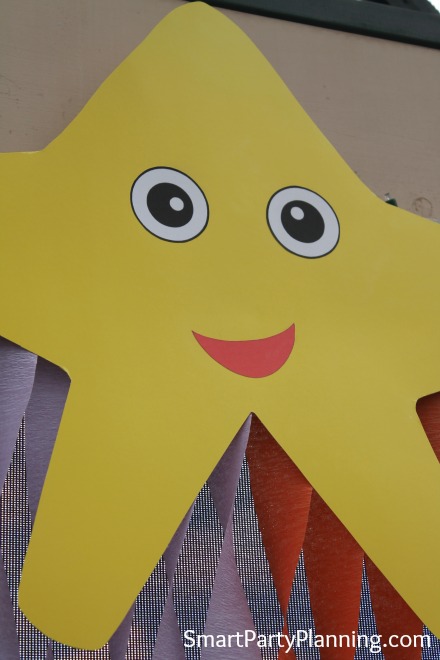 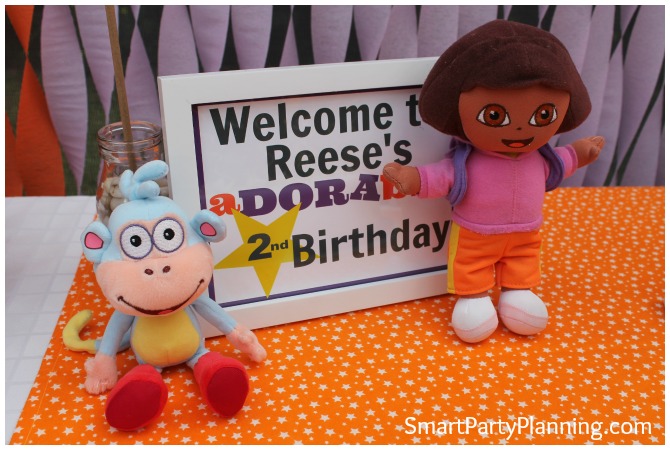 To add a splash more colour on the party table and continue to incorporate the Dora stars, I made several mini Dora Star decorations which stood in mini milk bottles.  She still loves to play with these now! 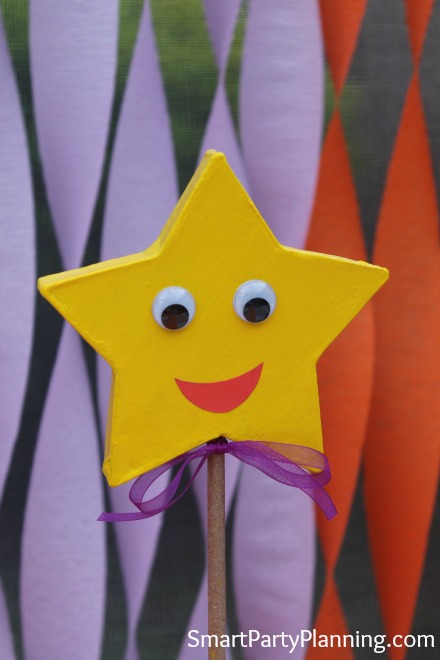 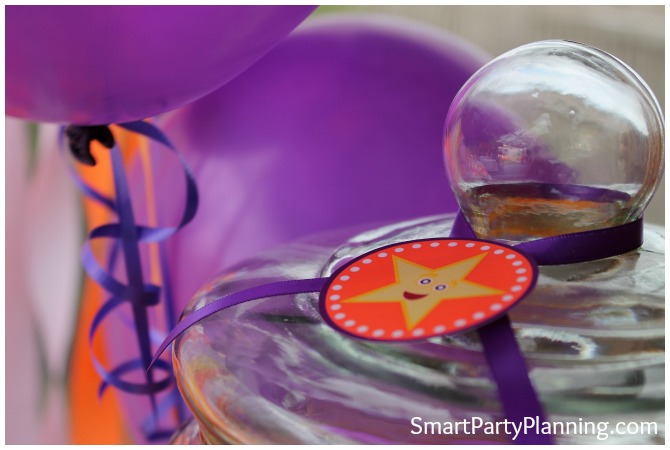 Tissue paper garlands were used around the wine barrels for extra colour and again they were cheap and easy to make. 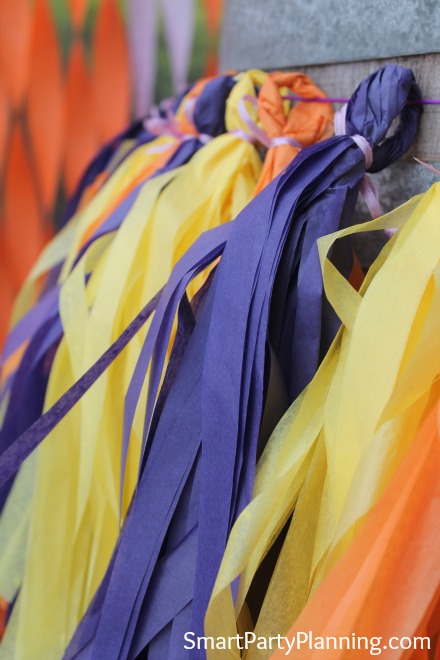 The food wasn’t “Dora The Explorer” themed as such, but I tied to incorporate a few cute ideas where I could.  I used some cheese sticks to act as ‘map’ and had some adorable star cookies.  Otherwise I kept the food simple with some star Vegemite sandwiches, fruit baskets, popcorn, mini quiche, mini donuts and chocolate crackles. 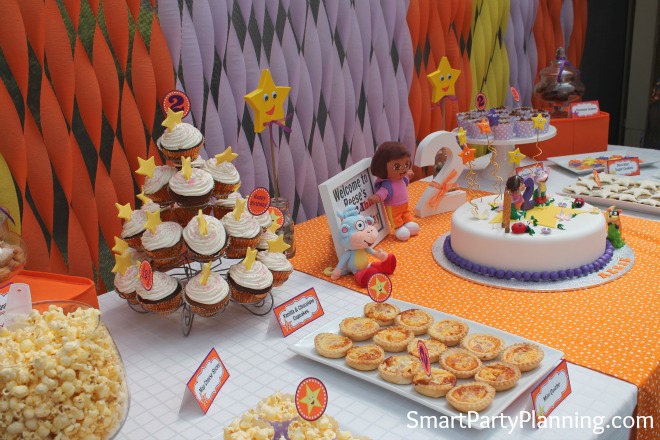 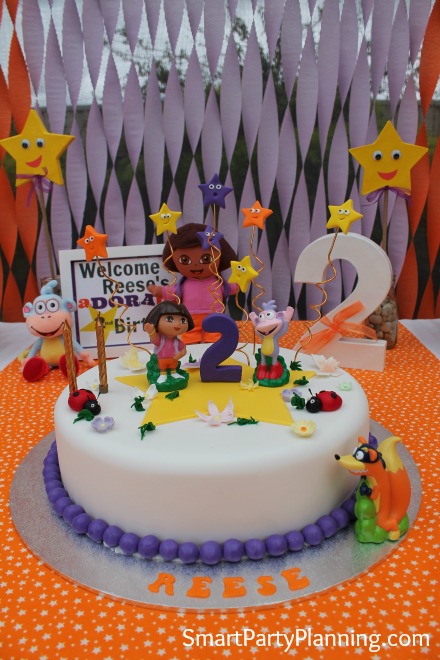 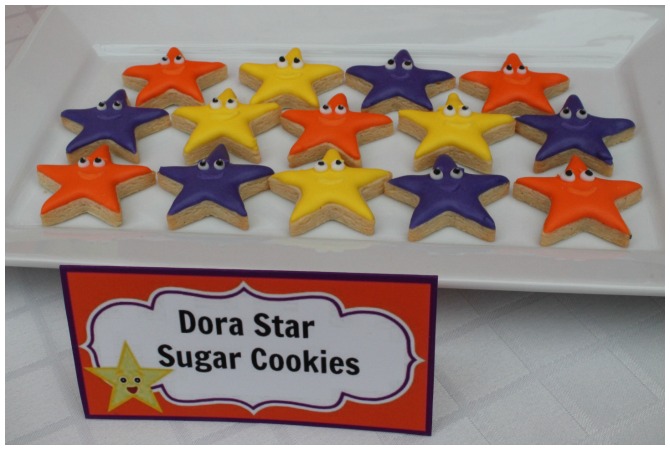 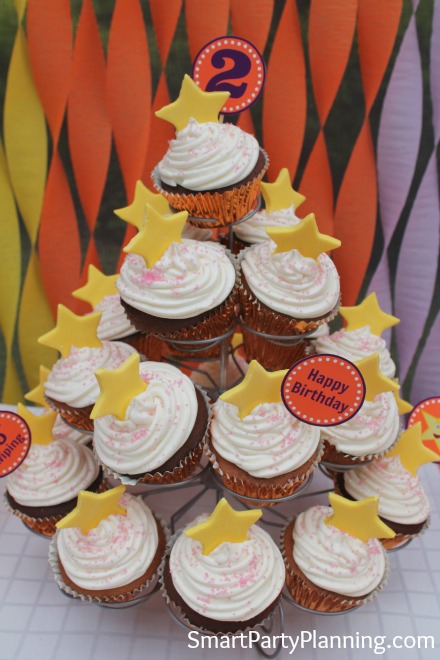 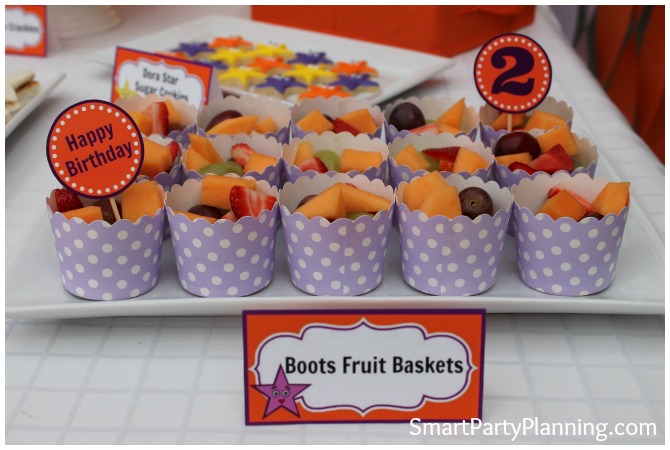 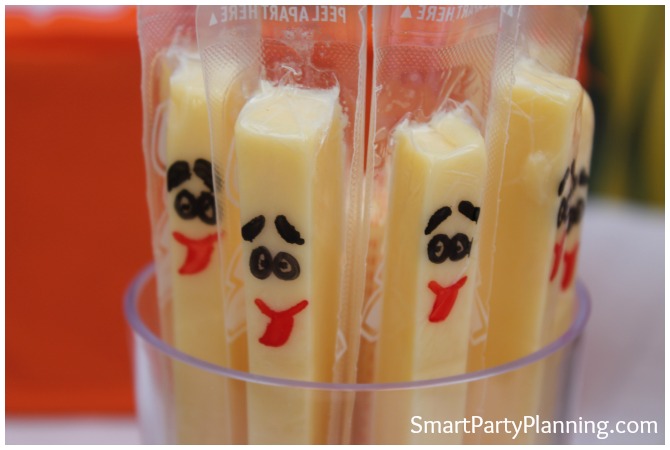 I designed all the printable’s using Dora stars as the main focus and each child had a water bottle with their name on. 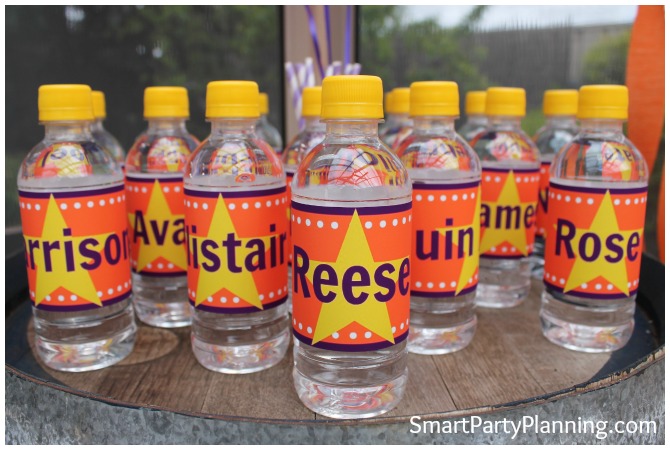 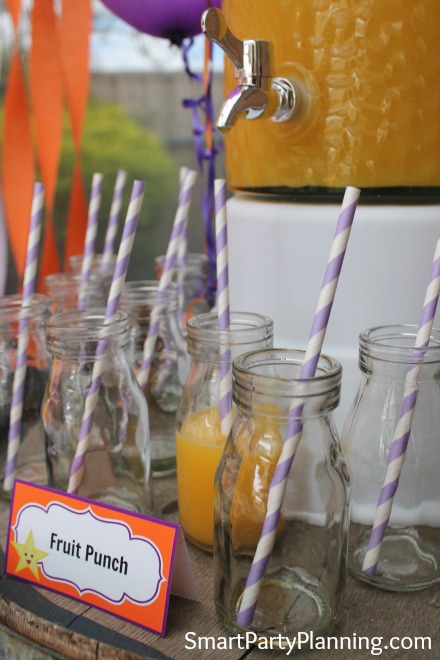 Dora the Explorer is always going on adventures, so I couldn’t resist the opportunity to create a treasure trail for the kids. Instead of giving the kids party bags when they left the party, they were all given a ‘backpack bag’ for the treasure hunt which acted as the party favors. 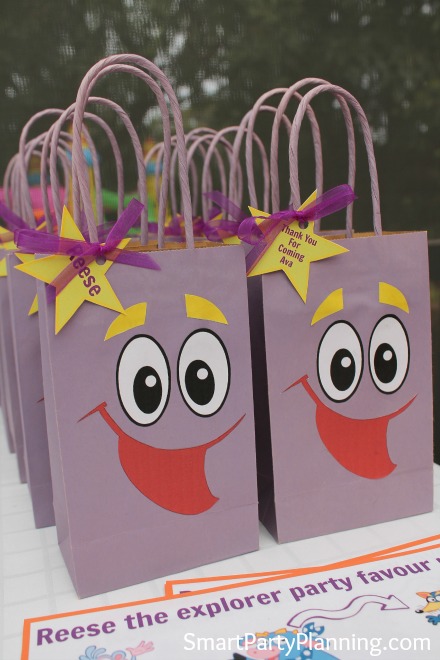 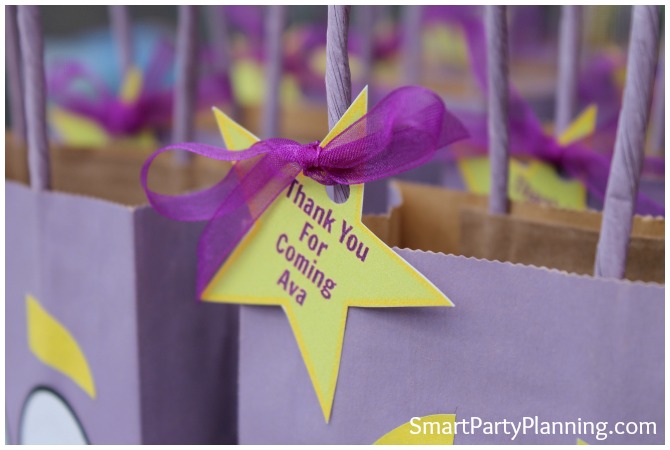 Each child was given a treasure map, and they all followed a route around the garden which was created by the pictures on their map.  This worked really well for 2 year old’s who would struggle to answer clues, and they enjoyed running around and burning off some excess energy from the party food! 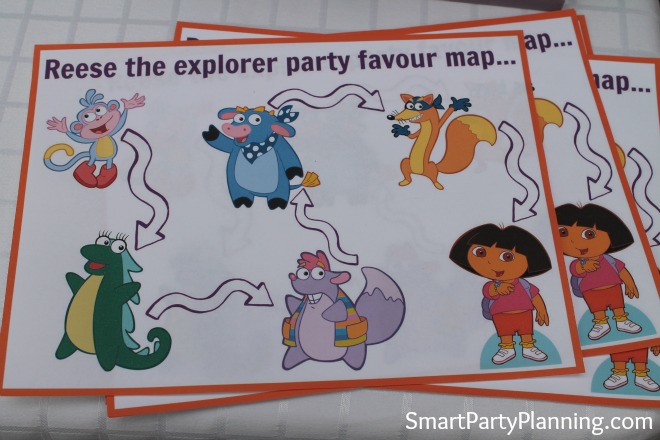 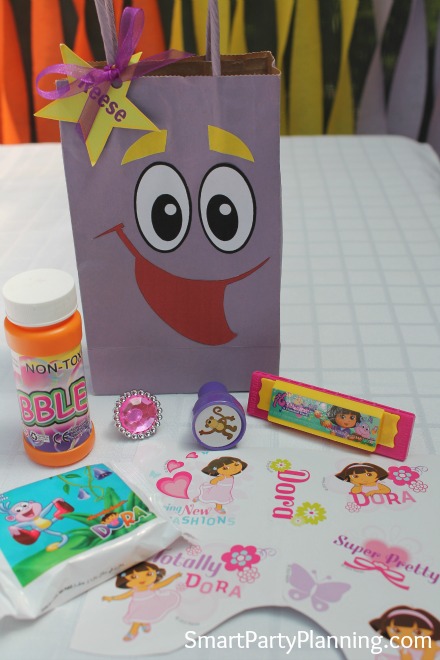 I also set up a station for colouring if the kids wanted some more quiet time. 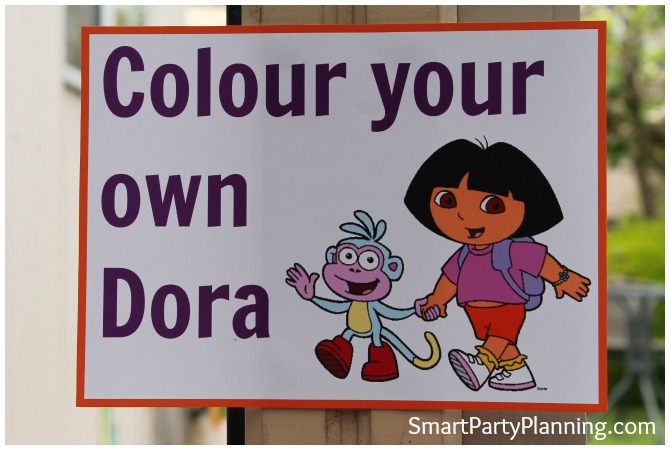 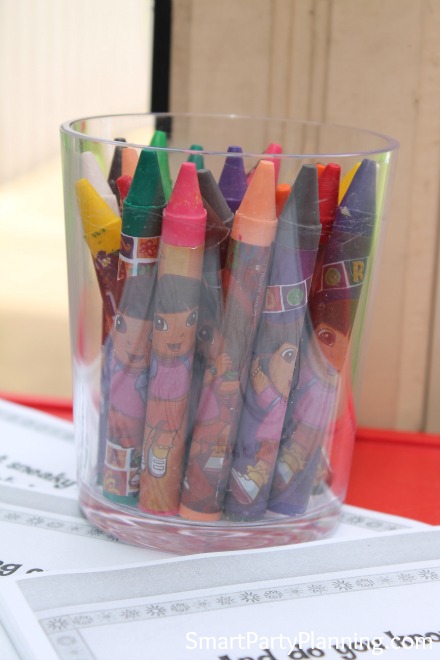 And finally, here is a picture of the party girl herself.  I can’t believe how much she has changed in two short years.  It wasn’t the greatest photo, but she was too excited to stand still for more than 5 seconds! 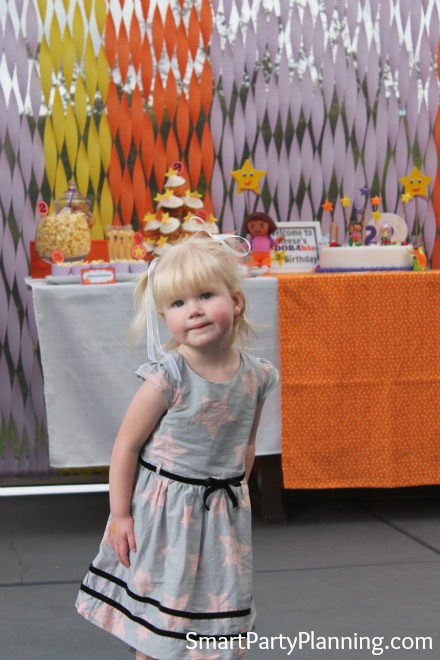 Planning your own Dora The Explorer Party?  Try these supplies to help set the scene… 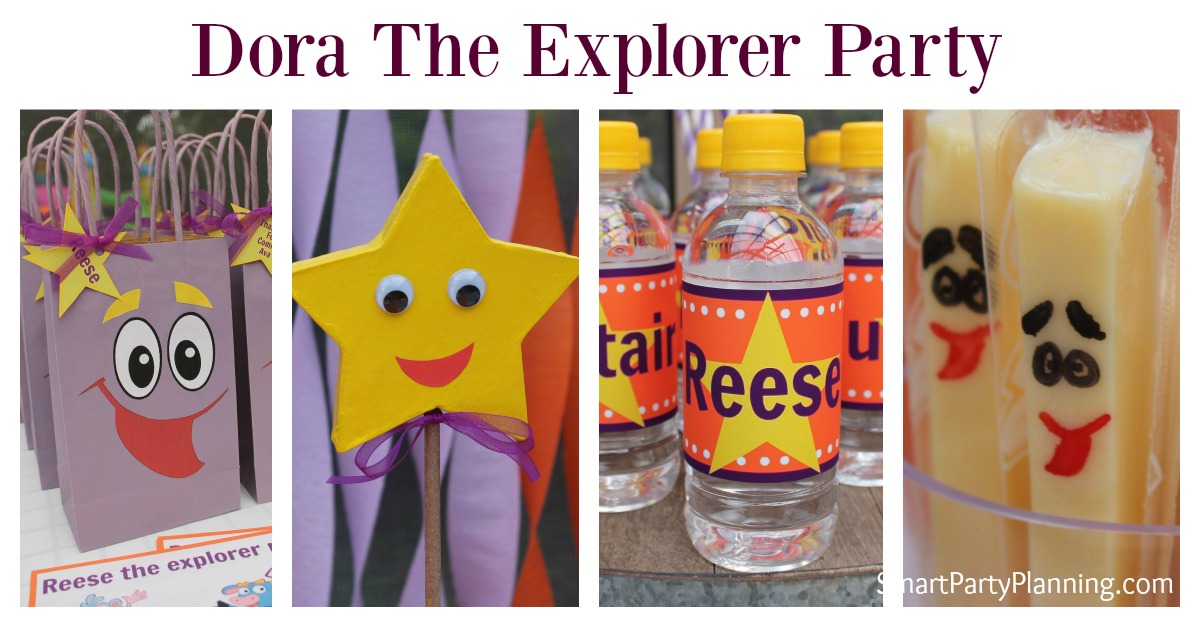 I hope you have enjoyed this Dora the Explorer party, even if it was two years later than planned!

© Catherine Holt & Smart Party Planning. Unauthorized use and/or duplication of this material without express and written permission is strictly prohibited. All content/photos are property of blog owner. One photo per post may be used, provided that full and clear credit is given to Smart Party Planning.
729 shares