You are here: Home / Recipes / Kids Party Food / How To Easily Make Fairy Bread For A Kids Party
87.0K shares

This post contains affiliate links. We may earn money from the products mentioned in this post, but this is at no cost to you, and helps bring you more creative projects. Thank you for supporting Smart Party Planning. 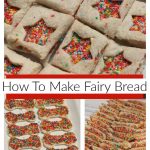 Learn how to make fairy bread for a kid’s party. Fairy bread is a party favorite for Australian kids, but will be enjoyed by kids all over the world.

It is incredibly easy to organize, with a super simple recipe. Transform the fairy bread into any shape to suit all party themes.

This is a total win win when it comes to catering for children’s birthday parties. 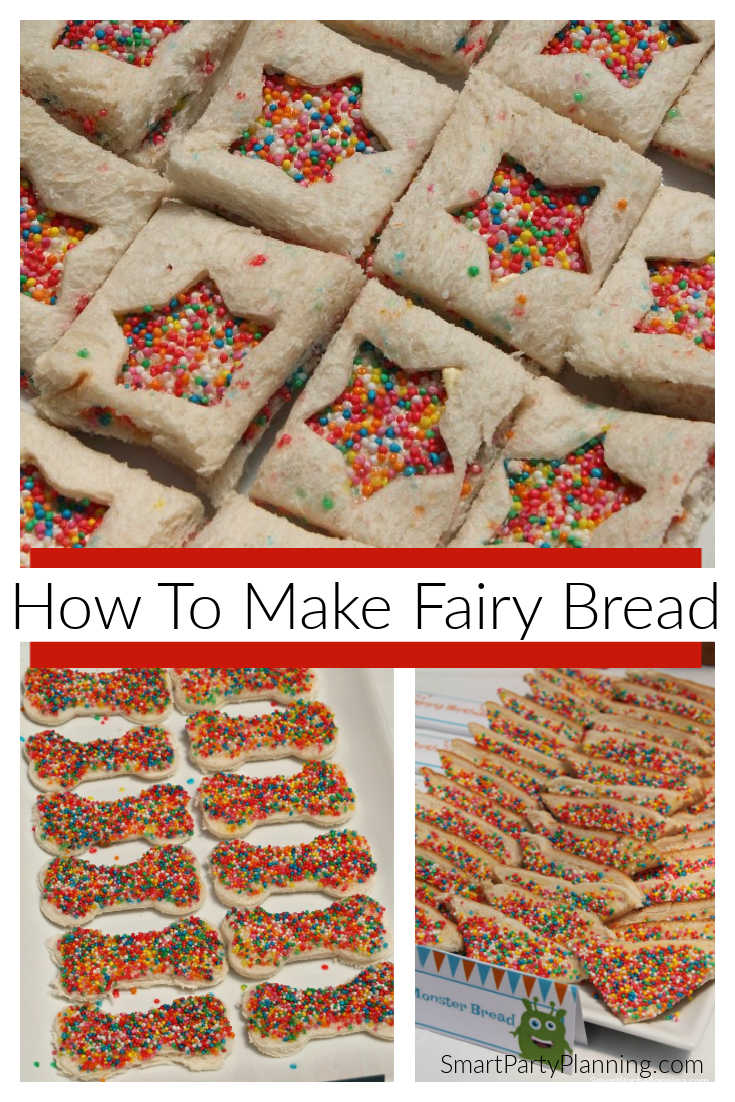 I don’t know about the rest of the world, but Fairy Bread is a staple for any kid’s party in Australia.

In fact, did you know that there is actually a fairy bread day here in Australia?

I’m not kidding. It’s that popular!

November 24th every year is dedicated to fairy bread day.

It’s the one day of the year that mom’s can feed their kids fairy bread for breakfast, lunch and dinner without feeling guilty.

It’s fairy bread day, so who is going to argue! 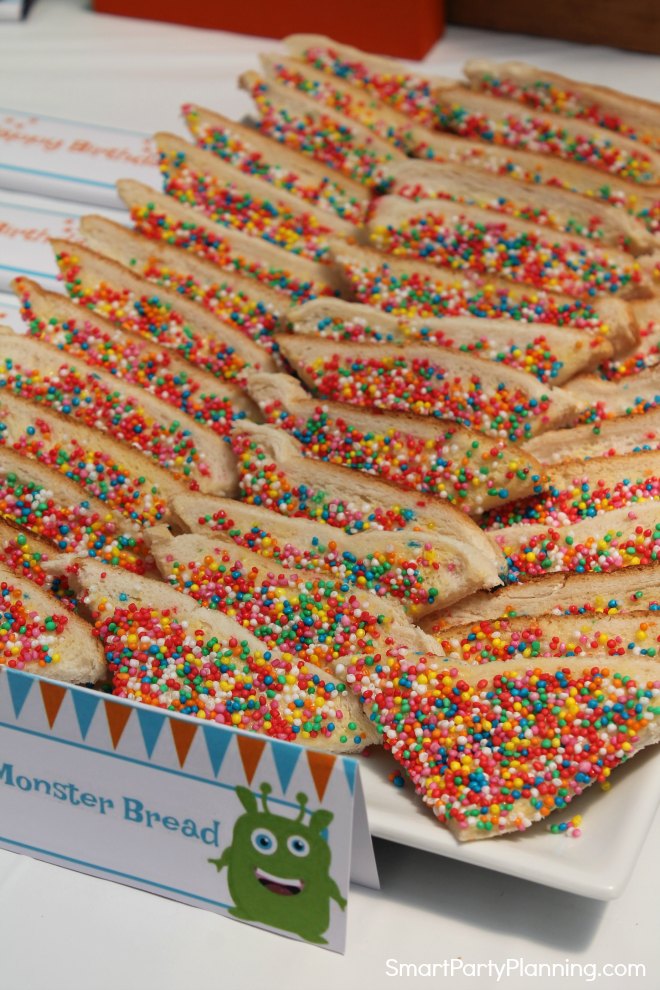 Now, believe it or not, fairy bread is not something that came naturally to me.

You see, I grew up in England and I had never heard of fairy bread, let alone tasted it. In fact, it wasn’t exactly a food combination that I would ever have thought of trying.

But, I had to come on board as fairy bread is kind of an Australian tradition and if my kids were going to live here, well we had to get with the groove!

So if you like me have never tried it, then I would SERIOUSLY recommend you do.

It may not seem like the logical choice at the time, but trust me, the kids will totally thank you for it.

What Exactly Is Fairy Bread?

You will need the following:

Simple grab your bread, cover it with margarine and then throw the 100s and 1000s on top. That’s it, your done.

As far as kid’s party food goes, it doesn’t get much more simple than this.

Typically the bread is cut into squares or triangles, but you certainly don’t need to be limited to that and you can be as creative as you like. 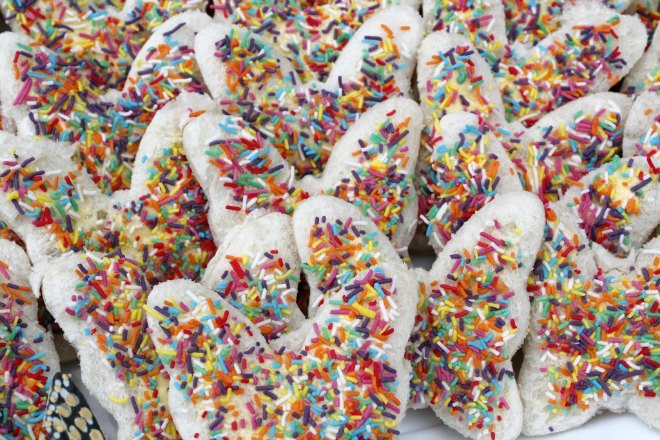 Fairy bread is definitely one of those things that you will either love or hate.

Having said that, I am yet to meet a child who doesn’t like the taste!

The bread is normal white bread, so it doesn’t have the added sweetener, but topped with the 100s ad 1000s, it does taste very sweet.

However, it’s no stranger than adding sweet jam to savory bread right?

The topping provides a definite crunch, whilst the bread is super soft. If you don’t like texture in your food then fairy bread is probably not going to be thing for you!

Get Creative With Your Styling Of The Fairy Bread

If you have a cookie cutter handy, why not use this to cut out the bread shapes.

There seem to be cookie cutters for every occasion so you should easily be able to find a cutter that will fit into your chosen kid’s party theme.

Tip: Before you cut out the shapes, butter the whole slice of bread first. Otherwise it can become quite fiddly trying to butter the individual shapes!

I created some star window fairy bread for my daughter’s rock star party. 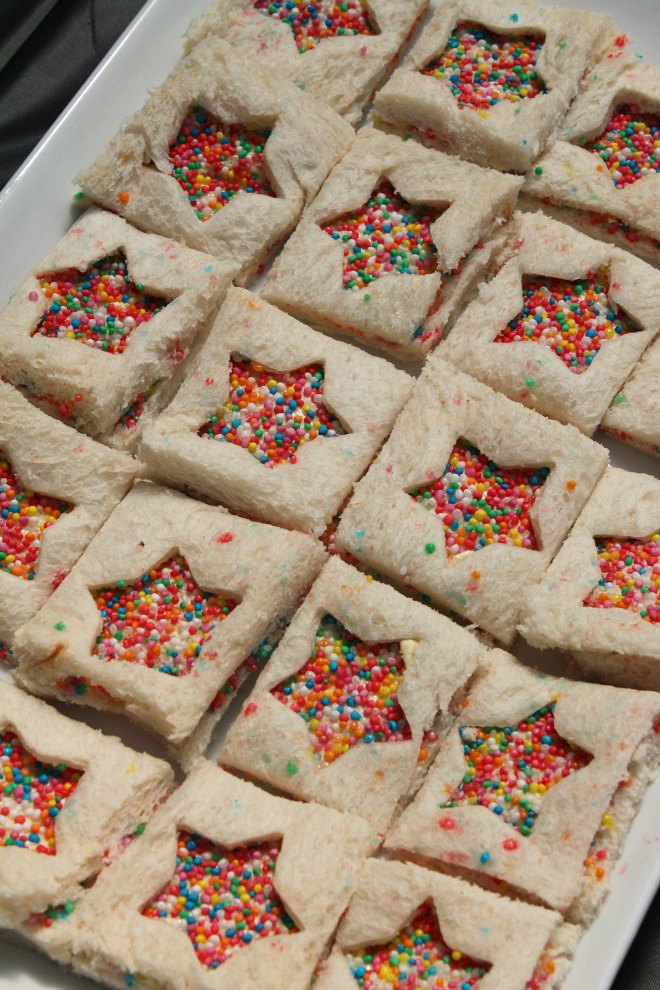 Fairy bread in the shape of bones was a lot of fun at my son’s Paw Patrol birthday party. 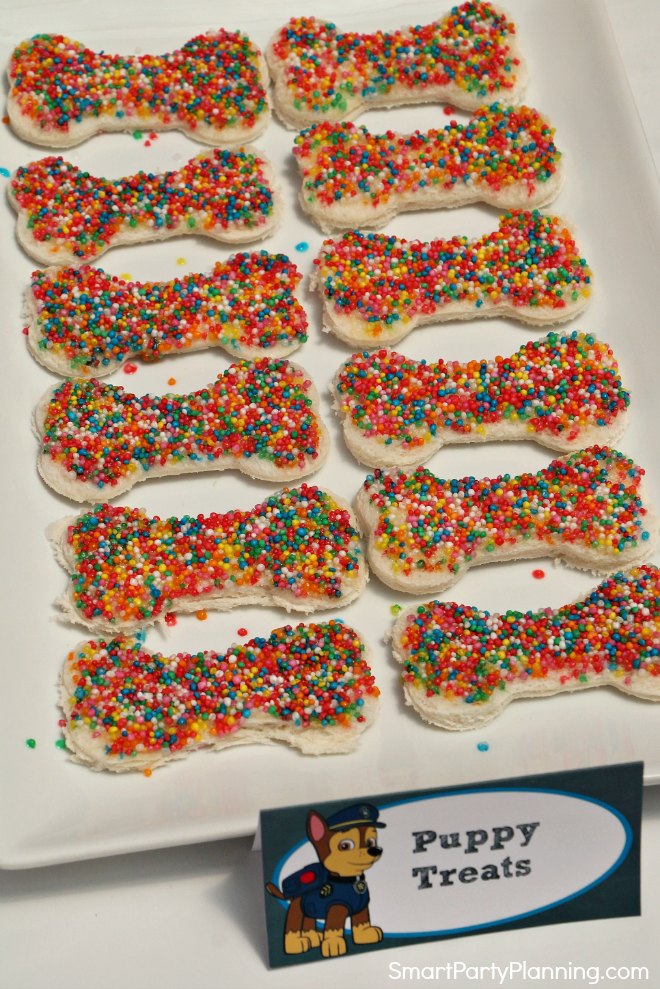 The great thing about fairy bread is that you can easily create something that fits into the individual theme of your party.

Alternatively if you don’t want to mess around with different shapes, you could roll them into small wheels.

This will make them look a bit different and it wouldn’t matter what party theme you are having. 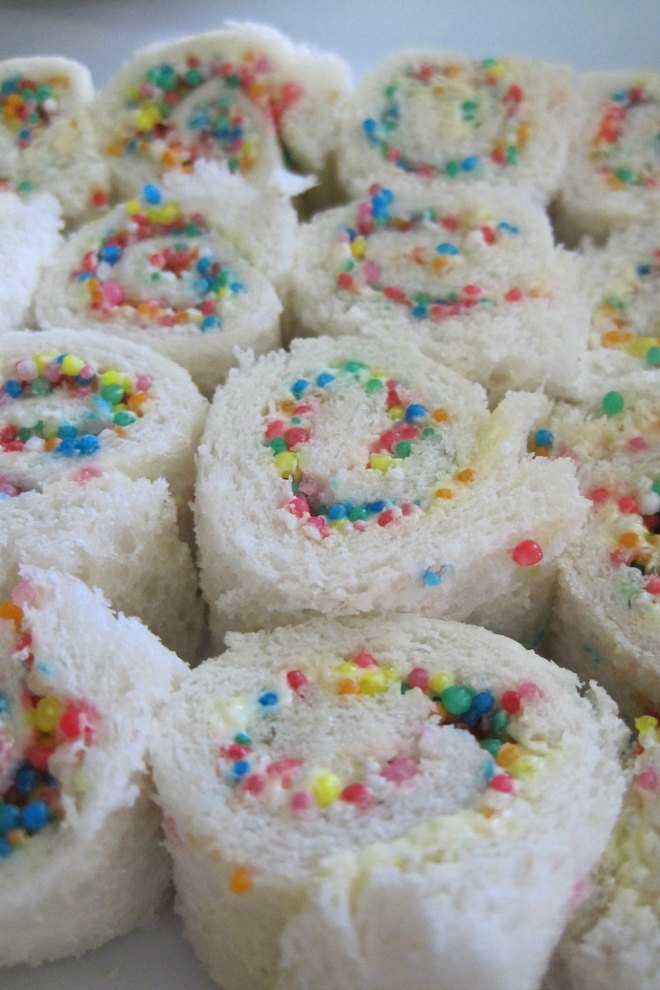 Do You Cut The Crusts Off Fairy Bread?

Ah, the debate of whether to cut the crusts off fairy bread or not.

Traditionally, the answer would be no.

The crust acts as a support which you hold the fairy bread with. This works especially well when cutting the bread into triangles or squares.

However, you will find that if you want to get creative with the fairy bread and either roll into a scroll or use cookie cutters, then you will need to cut the crust off.

It does make the fairy bread slightly messier to eat as there isn’t the stiffness of the edge, but it hasn’t stopped any kids I’ve seen!

Can You Make Fairy Bread Ahead Of Time?

Fairy bread is definitely best made as you want to eat it.

I would suggest that the fairy bread is the last thing you prepare for the party.

It can be made a few hours before you need it, but I wouldn’t recommend making it any earlier than that.

Whilst you can certainly keep leftovers in the fridge for the following day, it definitely doesn’t look or taste it’s best after the day it’s made. The coloring from the 100s and 1000s absorbs into the bread and the whole thing can become a sticky mess.

The best advice is to make the fairy bread shortly before you wish to eat it and then cover it with cling wrap to keep the bread fresh.

If you love the idea of fairy bread and your looking for some other party food for the kids, then I would recommend you check out the following.

Trust me…they are all SUPER EASY!!

If you havn’t given fairy bread a try at your kids party, now may be the time to change that.

It is seriously the easiest kids party food that you will come across. And besides, they will totally love it.

It’s super easy to change up a little bit too. If you would like to try fairy bread with a difference, you could try Nutella fairy bread.

In essence it’s exactly the same, but instead of using butter you use Nutella. Double yum.

So there you have it. You now know how to make fairy bread, the easiest kids party treat on earth.

You also know that once a year you can eat it all day and not feel guilty because you are totally doing it in the name of fairy bread day.

Could life get any better than that?

Let’s stay in touch. Do you love the idea of fairy bread at your next kids birthday party? Sign up to the weekly newsletter to be kept updated with other easy party, recipe and printable ideas to make planning the next birthday party a breeze.

© Catherine Holt & Smart Party Planning. Unauthorized use and/or duplication of this material without express and written permission is strictly prohibited. All content/photos are property of blog owner. One photo per post may be used, provided that full and clear credit is given to Smart Party Planning.
87.0K shares